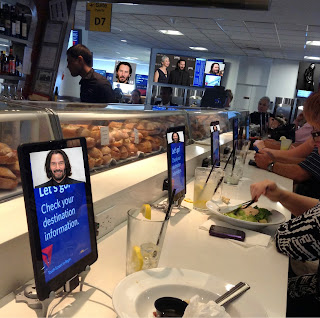 dwelling with Keanu at the airport

I recently wrote about the concept of "dwell time" at airports, for Slate's "Future Tense" series.

I also wrote about poor cell signals on airplanes parked at the gate, for The Atlantic.

Below are some paragraphs that didn't make it into the latter piece; they can live here:

The philosopher Jacques Derrida had a theory about structures. For any given structure to work, it has to have wiggle room—room for free play, where the pieces that comprise the structure can slip a little. Think of how buildings are built to withstand earthquakes, or how a steering wheel has just that little bit of give each way as you hold it in your hands, while driving. Or how concrete bridges utilize metal expansion joints to adjust to changes in air temperature. Cell signals at the gate are another example of this principle, where in order to provide maximum service to users, the carriers oversupply the airport but at the expense of the expansive tarmac areas that fall just out of reception zone for the terminal antennae, which are also just a bit too far from nearby cell towers. It’s a compromise, then, in order to sustain a larger (if always imperfect) arrangement.

And no system is totally enclosed. There’s always something extra, a remainder, which falls outside of or lingers beyond the structure. That’s part of the play. Reception will be fine in the airport, or out on the road—it’s just in a temporary abyss, right here. And it’s not simply because you’re inside the plane, or outside the airport. It’s because inside and outside are never finally settled. This has wide reaching implications. No wall can perfectly separate two countries; the Amazon rainforest isn’t definitively bound by its supposed geographic borders (as we know too well, right now); residential air conditioners don’t just regulate temperature indoors, but send emissions into the atmosphere. And airplanes on the tarmac and mobile devices in our palms are not only working within their own respective systems, but are entangled with each other—and everything else.

Commercial air travel and mobile communications, awkwardly coexisting at the moment before or just after a flight, become an example through which we might better understand human beings as a superorganism, or a species whose combined activities over time form intricate patterns that span far beyond any one single member of the group. Like ant colonies, or coral reefs: millions of smaller units that cumulatively create something vaster and utterly indistinguishable from the individuals.

Picture flight route maps, or cell coverage charts. These diagrams show that what humans are part of is never simply local, nor just abstractly global. Each connection made or missed, each signal attained or dropped, is part of a much larger structure—and the necessary free play involved therein. For it all to work, there are going to be places where it fails, where slippage can occur. This is terrifying to think of with respect to flight; less so, if more aggravating, to think about in relation to cell service. Together, though, they illuminate this massive process and the complex systems we’re all a part of.


Posted by Christopher Schaberg at 8:39 AM