I'm quoted in an article on airport food in The New York Times this week. When Joe Sharkey originally asked me the two questions—1. Do you have a strategy for dining in airports? and 2. From your perspective how has the airport dining experience changed over the decades?—here was my full response:

1. My strategy for dining in airports can't quite be called "eating local," because the word local doesn't exactly fit with airports. But let's call it thinking regionally. So, in San Francisco I always eat at the sushi place in the International Terminal. In Minneapolis, I go for the walleye in the mezzanine restaurant between the C and B concourses. Charles de Gaulle: baguette au fromage. In my own Louis Armstrong airport, a bowl of gumbo and some red beans. As for Detroit? Well, I hear there's a great new wine room in the McNamara Terminal. (Regional? Maybe not. But good wine always wins out.) Wherever you are flying through or to, study the airport maps before your trip: there's usually at least one restaurant of regional value in every airport, and you'll tend to get the freshest ingredients in those establishments.

2. I am interested in how airports appear in a range of cultural expressions, from literature to movies to the visual arts. What I find curious is how the figure of airport dining has been somewhat constant over the recent history of air travel. When I look at Arthur Hailey's 1968 pot-boiler Airport in which the main character has a hurried coffee in the airport restaurant; or at Garry Winogrand's airport photographs from the late 50s through the early 80s with waiting travelers looking haggard and bleary-eyed over lunch tables; or at Don DeLillo's characters killing time with cocktails before their flights (such as in the 1977 novel Players)—in all these examples I see a reoccurring theme of palpable tension, of people not able to relax enough to enjoy their sustenance. Sometimes one hears nostalgia for a time of flight when travelers were less rushed, and airline and airport employees were formal and treated travelers like royalty. But from my research, it seems as though air travel has always involved a certain malaise or a core of anxiety that makes dining a vexed enterprise. This might explain the success of Starbucks in contemporary American airports, those ubiquitous and recognizable facades where travelers can buy a sandwich or a scone, and a coffee or juice, at any time of day just to get it over with and go wait at their gates for their flights, nibbling or munching and sipping their drinks lest there be a delay. Somewhat against its traditional sensuous coffee-shop image, Starbucks manages to peddle airport dining without any illusions of relaxation or enjoyment. Not that one necessarily has to follow this model; one can try to find the regional food nestled in a nook further down the concourse. 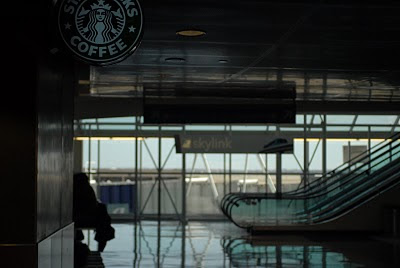 Photo by J. Ryan Williams
Posted by Christopher Schaberg at 7:03 AM 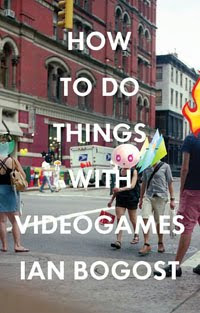 I recently wrote an Amazon review of Ian Bogost's sprightly new book How to Do Things with Videogames. I want to extend that review here in order to think through some related things.

This book's form makes it incredibly accessible and inviting: 20 short essays or occasions through which Bogost invites his readers to think (without any heavy imperative to 'think critically') about how videogames have become a "mature medium."

Bogost describes myriad videogames along the way, and his scene and scenario descriptions are precise and nuanced, yet always concise such that even non-gamers will follow and find solid points of attachment and interest. (I haven't played a videogame seriously since 1992: Metroid II on Game Boy.) In other words, the book is not only an astute and scintillating argument; it is also educational in the most satisfying sense of the word. Speaking of education, I can definitely imagine teaching this book in an undergraduate digital humanities course, as it demonstrates this emergent field at its best: in grounded, lucid, and layered investigations.

In short, How to Do Things with Videogames will be of great interest to all sorts of people: everyday gamers and game makers, certainly, but also to non-gamers as well as to scholars and students of contemporary culture—which is to say the book is media studies for the world.

(That's the end of the Amazon review.)

It really is a wonderful book, and I'm planning to teach it next semester in my "Interpretive Approaches" course at Loyola. Foregoing the standard theory reader, I'm going to organize the course around a handful of short books that reflect how the lessons of critical theory (conceived broadly) are being adapted, expanded, and otherwise put to work in contemporary contexts. (Other books on the syllabus might include Kathleen Stewart's Ordinary Affects, Elaine Scarry's On Beauty, and Graham Harman's Circus Philosophicus.)

But back to How to Do Things with Videogames. As I read this book I found myself thinking more and more about the world of that Game Boy game Metroid II that I spent so many hours immersed in after school days. I even found a longplay recording of the game on YouTube and watched it, totally mesmerized for a while. 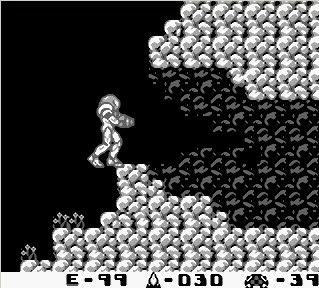 For me, the murky world of Metroid II was linked to another murky world: it was the fall of my freshman year of high school and I was in a new school, my dad having taken a new job and moved the family to a new town (near Detroit). I wasn't playing sports (I would start wrestling that winter), and I hadn't made any real friends yet. What I had done was babysit for a neighborhood boy a few times, though, and I used that money to buy a Game Boy. The devices were only a year or so old at that point, and they were still cutting-edge feeling, like handheld portals to other visible worlds. Since my parents didn't allow television in our house (long story), it seemed like a clever alternative way to play videogames—somehow I convinced them that it was nothing like a TV videogame console. Metroid II was one of the first games I bought, and I remember concentrating on it solidly for...some time. In my memory I played the game for weeks or maybe even months before I beat the final level. But this can't be accurate; it probably took no more than a week of obsessive afternoon sessions for me to finish the game. And yet the game is lodged in my mind, affiliated with an assemblage of associations related to that time in my life.

I guess my point is that this is another thing one can do with videogames: find clusters of memories bundled around particular games and acts of play. Later that fall, I sold my Game Boy and all my games and accessories (including that awkward but cool magnifying lens for the screen) to a schoolmate (no memory of who it was), and I used the money to buy fishing gear. I was entering the obsessive fishing phase of my life—but that's another story for another time.
Posted by Christopher Schaberg at 8:07 PM

My colleague Mark Yakich and I just launched a site called Airplane Reading. Airplane Reading is an online, ongoing anthology dedicated to people's ordinary and extraordinary stories of air travel. The site features creative nonfiction, anecdotes, and observations about everyday experiences and misadventures of modern flight. New pieces are posted daily, and each week we select one to feature. Submit your own story here.

Our two-sided memoir about flight just came out, too: Checking In / Checking Out is about Mark's lifelong fear of flying, and about my time working for United Express/SkyWest Airlines between the years of 2001 and 2003. An excerpt of my side of the book, about working at the airport when 9/11 happened, is featured today in The Millions.
Posted by Christopher Schaberg at 9:23 AM