I've often joked about wanting somehow to acquire an abandoned airport and convert it into an art gallery—or just capture it as a tremendous art piece, really, everything around the normal operations of flight left undisturbed.  Another idea: take an old airport and reclaim it as a liberal arts college campus.  I like the thought of holding seminars in the departure lounges, and having studio art classes around old luggage carrousels. Intact aircraft scattered around the tarmac would serve as dorms, and the control tower?  Just think of the possibilities...

I suppose these fantasies are related to my fascination with "airplane boneyards": those places in arid geographic locations where aircraft go to hibernate, die, or be salvaged.  I can rove over the Google satellite views of these ghostly landscapes for hours.  Here's a snapshot of the boneyard outside of Tucson, Arizona:

There's something chilling yet captivating about seeing all these planes lined up, some cockeyed or askew, all types of military planes returned from who knows what far flung missions and campaigns.  Look at that swing-wing fighter jet with one wing akimbo and the other wing gone; or the one missing both wings and sitting off alone, as if multiply abject.

It may be that I have just finished rereading Cormac McCarthy's novel The Road, and it has put me in the mindset of ruins and remains.  McCarthy himself did not miss the chance to conjoin twentieth-century flight lore and post-apocalyptic survival; in one memorable image he describes wandering refugees "wearing masks and goggles, sitting in their rags by the side of the road like ruined aviators."

This topic makes me want to return to Don DeLillo's Underworld, to mull over those scenes where one character has begun a massive endeavor to turn a boneyard into a vast three-dimensional canvas of sorts: "We can paint their deactivated aircraft."

Perhaps at my airport liberal arts college I'll finally teach a course on "airport studies," which will take into account the various weird ways that air travel lends itself to creative re-purposing, philosophical speculation, and perceptual shifts away from flight per se.  "Airport studies" is also the title of one of my book chapters that wanders and wonders down this path a bit.  (My book, by the way, now appears on the Continuum site in its paperback edition, for an appealing $24.95!)
Posted by Christopher Schaberg at 4:15 AM

Below is the final installment of my essay "The Work of Literature in the Age of the Office." Scroll down for parts 1, 2, & 3.

But seen from another angle, Wallace desire is also what is achieved by any act of literature: writing is always necessarily a trace of human effort, or work. This either unique or obvious sense of Wallace’s intention for The Pale King is reminiscent of what was arguably the first great office space narrative: Herman Melville’s 1853 story “Bartleby, the Scrivener: A Story of Wall Street.” While The Pale King adds to the complex (genre) of contemporary office space novels including Personal Days and Then We Came to the End, Wallace also conjures Melville’s much earlier tale that provides—in an anticipatory way—a critical backdrop for the contemporary tales of office work. I will conclude with a few remarks on “Bartleby, the Scrivener.”

In Melville’s story, the narrator employs Bartleby to work in his “good old office” as a law-copyist:

At first Bartleby did an extraordinary quantity of writing. As if long famishing for something to copy, he seemed to gorge himself on my documents. There was no pause for digestion. He ran a day and night line, copying by sun-light and by candle-light. I should have been quite delighted with his application, had he been cheerfully industrious. But he wrote on silently, palely, mechanically.

The figurative gustatory language of “famishing,” “gorge himself on,” and “digestion” ironically anticipates the dramatic turn of the story, whereby Bartleby abruptly stops writing, and gradually starves himself to death. Bartleby’s shift in attitude is marked by his resorting to the infamous line “I would prefer not to”—repeated again and again in increasingly absurd contexts.

In The Parallax View, the philosopher Slavoj Žižek explains Bartleby’s maddening refusal as “not so much the refusal of a determinate content as, rather, the formal gesture of refusal as such.” Put another way, it is not that Bartleby simply stops writing in the law office, but that he stops (working) in general.

In the context of work and the Work as I have discussed them in relation to contemporary office space novels, Bartleby represents a critical stopgap for work (writing in the law office), and the Work (the story) takes place. The office once again is poised as the uncertain space that loses focus, dissolves in repetitive, endless tasks; meanwhile, the Work of literature emerges into (or as) the foreground.

In his reading of “Bartleby,” Žižek goes on to claim that “there is a clear holophrastic quality to ‘I would prefer not to’: it is a signifier-turned-object, a signifier reduced to an inert stain that stands for the collapse of the symbolic order.” In other words, “I would prefer not to” is not simply a “No!”—but rather states a preference for something in the negative. Bartleby’s seemingly simple refusal is in fact an embodied “structural minimum” that, when given, causes the entire positivistic system of production to tremble, by evoking a nonsensical yet present negation.

Critical for Žižek is the supposition that this trembling of the system remains after the system is gone—all systems must tremble in order to change, and therefore the trembling (which is a negative structural quality) should be a constant. Within the incomplete novel The Pale King, Wallace’s I.R.S. office is left trembling in its incomplete state. In this light, we might think of The Pale King as a sort of Bartleby figure always asymptotically approaching death, both before and without death, because an incomplete novel can never end. Thus Wallace’s own death might be seen to literally let his Work live incomplete, a curious testament to endless work.

To return to the first three case studies—Mad Men, Then We Came to the End, and Personal Days—we might conclude that what keeps these texts from being truly critical (of) office work(s) is that they, in a word, prefer to narrativize (often to excess) the office. The structural logic of office work is without end, and thus it endlessly affirms the relations and forces of production that determine the work. This keeps what Henri Lefebvre would call “the social text” legible—if still unread. Yet the Work contains work, offering the idea(l) of a meaning “in the end,” as the banal/apocalyptic saying goes. This is the work of literature in the age of the office: literature converts endless work into a finished product, and provides meaningfulness where perhaps this meaning-making itself might rightly be called into question in a way that the Work cannot quite manage.

Wallace’s The Pale King and Melville’s “Bartleby” complicate the work of literature in the age of the office, suggesting in their own ways that scriveners and authors alike will continue to die, but the work always remains—and (just) writing cannot break free of this dire matrix. Literature never simply reflects office work, but stands as a fundamental conceptual knot where work and the Work are inextricably tangled. For literature to be able “to show the world what it is to be a human being,” the Work would have to tunnel equally and endlessly into the work…accepting the full risk of never (re)emerging complete. In the end, Wallace’s unfinished Work will never have an adequate conclusion, and this most truthfully—if also troublingly—reflects the basic condition of office work which is, in principle, never complete.
Posted by Christopher Schaberg at 5:28 AM 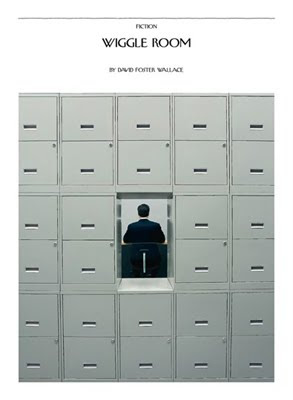 I am fresh from my wonderful, stimulating panel on David Foster Wallace at this year's American Comparative Literature Association conference in Providence, Rhode Island. I am now sitting in the Providence airport waiting for my flight to Dulles to board, thinking back on all the fascinating papers and appreciating the eclectic group of smart scholars working on this contemporary writer. The airport is a perfect place to reflect and write. And now is the perfect time to post the next section of my essay "The Work of Literature in the Age of the Office." (Parts 1 and 2 are below.)