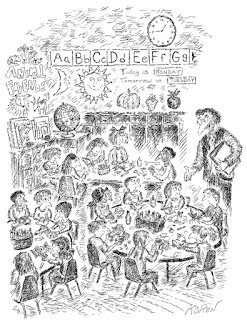 I couldn't believe it when I saw this Edward Koren cartoon, which appeared in a recent issue of The New Yorker. Koren’s illustration shows circular tables of little kids working on various projects with scissors, glue, papers, and tape. The teacher, towering overhead, urges them on, calling for “deliverables.” Impersonal business-speak in the kindergarten classroom! Gross!

The problem is that if you’ve read Malcolm Harris’s new book Kids These Days: Human Capital and the Making of Millennials, or even if you’ve just been around a lower school classroom recently, the joke falls flat. The picture is all too real. And it doesn't stop at lower school. I wrote a review essay about Harris's terrific book for Public Books.

I've also been reading Nicholson Baker's amazing Substitute, which is eerily akin to Kids These Days. I say "also reading" because it's a serious slog: over 700 pages, recounting around thirty days of working as a substitute teacher in a public school system in Maine—each day meticulously, Bakerly detailed. It's fascinating and disturbing, with iPads becoming an increasingly ominous minor character as the book unfolds.

Speaking of deliverables, but hopefully not the gross kind, we're about to publish four new books in the Object Lessons series—Luggage, Souvenir, Rust, and Burger—bringing us up to 35 since we published our first four volumes in January 2015. I wrote a conversation essay with two of our recent authors, Anna Leahy (Tumor) and Susan Harlan (Luggage), about what it's like to write (and edit) these slim books. The piece is up at the Essay Daily.

I also wrote a piece on jet engines for our series, at The Atlantic. This piece was thrilling to write, on the heels of one of our NEH workshops and on a high from the scintillating energy of our participants and The Atlantic boardroom, where we held the event.

Some of my recent essays and other spurs are starting to converge around a new book idea, a book I'm thinking of calling Future Proof: Anthropocene Remains. I can feel it taking shape...it's coming together in my mind....

Posted by Christopher Schaberg at 7:01 PM 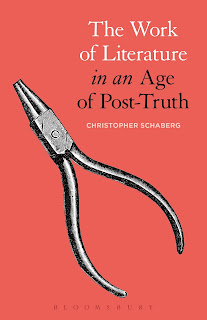 “The Work of Literature in an Age of Post-Truth captures the essence of what it is like to experience the wildness of the 21st century as an observant, thinking human. The banalities of everyday life mix here with the political urgencies and mediatic confusion of our age. Schaberg has sketched a convincing portrait of this unsettling moment.”

—Christy Wampole, Associate Professor of French, Princeton University, USA, and author of Rootedness: The Ramifications of a Metaphor


“In this book Christopher Schaberg asks us to consider the work of literature not so much as an antidote to ‘post-truth’ political culture in the USA as an alternative way of life. Here literature figures as lively engagement with the world, a practice of enthusiasm and commitment.


“This rapidly cascading kaleidoscope of lovely readings and thoughts about reading, by the generous and imaginatively mercurial Christopher Schaberg, amounts to a guidebook for the significance of the Humanities in visualizing different futures.”