I thoroughly enjoyed Mark Alan Stamaty's touching autobiographical narrative in the most recent cartoon issue of The New Yorker ("A Cartoon Legacy," October 31). Here are the last three frames: 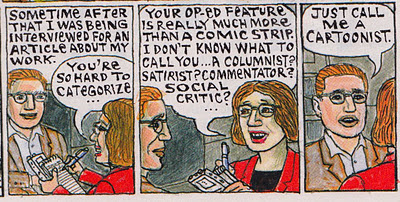 Stamaty may just call himself a cartoonist, but I find his work to be rife with literary-theoretical significance. I remember as a child being mesmerized by Stamaty's book Small in the Saddle (1975), a story that I now appreciate as a revisionist history of the American West as shrewd as Annie Proulx's Wyoming stories or Cormac McCarthy's Blood Meridian. 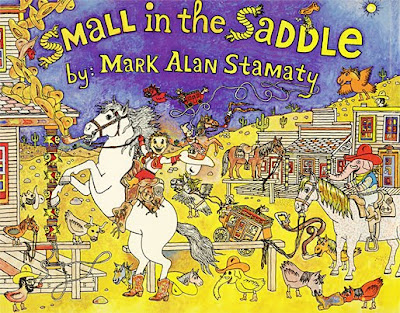 Then there is Stamaty's Who Needs Donuts? (1973), which explores ideas of solipsism, addiction, and connection in a consumer culture with as much ambition and layered meaning as David Foster Wallace's sprawling Infinite Jest.

As one more example, Stamaty's illustration of Frank Asch's story Yellow Yellow (1971) illuminates an urban ecology with an attention to detail and texture that now seems to have been anticipating contemporary forays into object-oriented ontology.

I'm drawing on memories from 30 years or so ago, but as I recall, this story is about a boy who finds a yellow construction helmet on the ground, and he puts it on and starts to walk around; the only problem is that it is adult-size, and so it partially covers his eyes—it gives the world a weird yellow hue, strangely magnified. Yet this obfuscation and yellowing of vision ends up turning the world magical and seen to be teeming with all sort of things, and complicating the barriers between living and nonliving, human-scale and frog-scale, built and organic. The conceptual boundary lines all become wonderfully blurry, and indicative of a flattened ontological plane replete with bricks and beetles and boys, nails and nuts and newspaper clippings, frogs and Formica, tangled string and two-headed turtles: 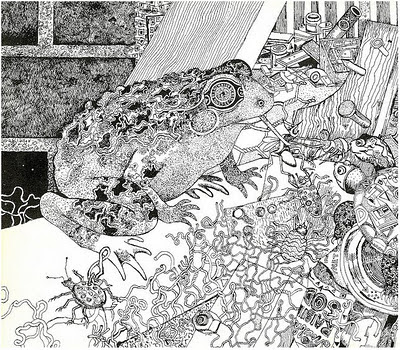 It's not that everything is jumbled and therefore matters less, or that the human character in the story becomes insignificant; rather, it's that everything takes on more meaning under the object-oriented spell of the construction helmet. And I won't give away the ending, but it involves the safety helmet having to be returned to its rightful owner...nevertheless, the boy discovers a way to stay in the vibrant realm of objects, anyway. 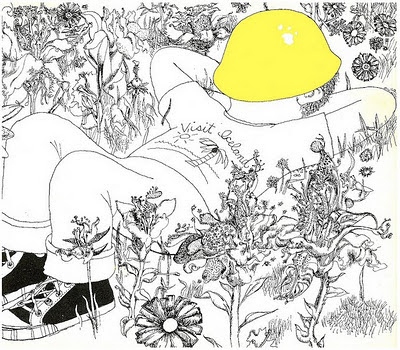 Posted by Christopher Schaberg at 2:18 AM

The Textual Life of Airports 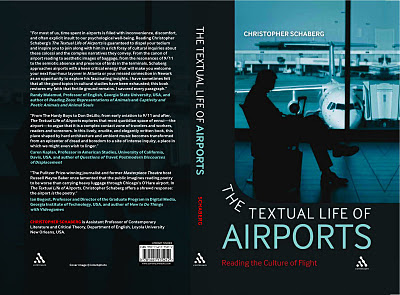 My book The Textual Life of Airports: Reading the Culture of Flight will be available December 1.

The hardcover edition is $100—which I know might seem rather expensive. Look, it's an academic book; such pricing is fairly standard. More than that, though: it's worth it! It will change the way you experience—and tell stories about—airports. If you don't have a hundred dollars to spare, please request the book from your local or campus library. The much less expensive paperback edition will be out next year.
Posted by Christopher Schaberg at 2:08 AM

Book Review: A Meaning for Wife 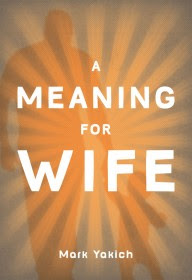 My good friend and poet colleague Mark Yakich just published his first novel, A Meaning for Wife. Mark told me about this novel when we first met, at which point it was still forming in notes on the back of Mark's hands (sometimes both of them, well up onto his forearms). The novel begins and ends on airport taxiways, just before the two flights that bookend the story—so I had an obvious point of interest. Then I read a galley of the novel when it was picked up by the savvy independent publisher, Ig.

It seems to me as though this novel is taking up David Foster Wallace's anticipation of a new kind of U.S. fiction. In his 1993 essay "E Unibus Pluram: Television and U.S. Fiction," Wallace writes:

The next real literary "rebels" in this country might well emerge as some weird bunch of "anti-rebels," born oglers who dare somehow to back away from ironic watching, who have the childish gall actually to endorse and instantiate single-entendre values. Who treat old untrendy human troubles and emotions in U.S. life with reverence and conviction. Who eschew self-consciousness and fatigue. These anti-rebels would be outdated, of course, before they even started. Too sincere. Clearly repressed. Backward, quaint, naive, anachronistic. Maybe that'll be the point, why they'll be the next real rebels. Real rebels, as far as I can tell, risk things. Risk disapproval.

A Meaning for Wife functions in precisely these ways. What follows is a version of the review I posted on Amazon:

|
When I first read A Meaning for Wife it reminded me of the stories told in the films Garden State and Grosse Pointe Blank. Like these two movies, Yakich's novel has a similar theme of existential searching within the suburban banalities of late American life. Specifically, "A Meaning for Wife" explores the psycho-geography of Algonquin, Illinois (a suburb of Chicago), under the pretense of a 20th high school reunion, itself cast in the dark shadow of the sudden death of our main character's wife.

I was recently teaching Ernest Hemingway's The Sun Also Rises in a 20th-century American fiction course when I realized that A Meaning for Wife is actually participating in a longer lineage of American narratives of disillusionment and irony—irony so deep that "depth" isn't even the right way to describe it. The irony of this kind of fiction is through and through: there is no surface of sincerity that escapes its opposite meaning, and so you can never quite be certain how to take things. The characters who are rendered pathetic are in fact the most stable; the crazy ones utter startling truths from time to time; and home is both safe and claustrophobic for our main characters.

This constant uncertainty of meaning stems from the fact that the main characters of these narratives have lost something significant (Jake Barnes's "accident"; the sudden death of one's lover in A Meaning for Wife), and everything experienced thereafter is distorted and distended, marked by this loss. And neither does the surrounding world stand out as full or fully present: the world too becomes exposed as riddled with lack—even when it is apparently charged with excess. (One might consider Walker Percy's The Moviegoer as another text in this genre, and also Lydia Davis's Varieties of Disturbance.)

The main character of A Meaning for Wife is at turns humble and arrogant, despicable and admirable, hilarious and morose, wise and absurd. His witticisms often morph into lyrical mush over the course of a paragraph, and his mature (and indeed 'experienced', in the Blakean sense) perspective is continually undermined by the sniveling, "squawking" toddler son Owen who accompanies our main character like a parodic Yoda in the backseat of the grandparents' "dull beige sedan."

A Meaning for Wife is peppered with brilliant turns of phrases on every page, like a spontaneous decision to leave the past behind and drive all the way to California, an American Western trope cut short by the realization that Owen will doubtless get hungry and therefore they'll "never make it farther than the Mississippi." Or this observation, as the reunited high school chums drink their way through giddy (if at times awkward) conversation: "Swallowing—isn't it simply another way of marking time?"

The genius of this novel is that it bumbles along on a journey that is always just on the brink of happening, right up to the final sentence—while at the same time, the narrative keeps us wondering if in fact the very concept of 'the journey' is located irrevocably and maddeningly in the past, even as we (must) hurl ourselves into a future to come.
Posted by Christopher Schaberg at 2:15 PM

This morning I saw more faces and figures on "autoracks" as they passed—a great rat, a snowman, a mystery visage, and some sort of hooded ninja: 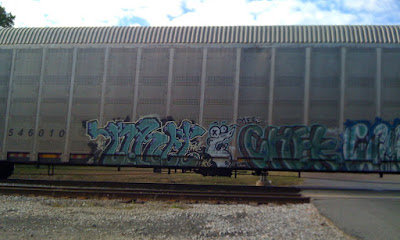 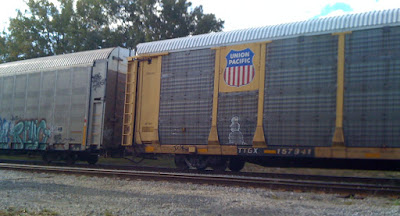 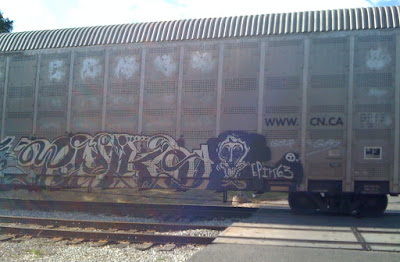 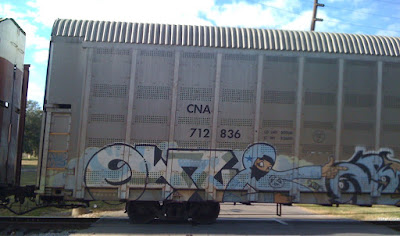 As I watched these faces roll by I was reminded of when I lived in Montana and saw similarly striking moving-canvases. My friend Greg Keeler and I would fish these weird parts of the Gallatin River, places where, to get to, you'd have to walk along the tracks—sometimes right between a vertical cliff on one side and the swirling river below on the other, and if a train came you had to sprint to where the cliff leveled off or the riprap became generous enough to climb down onto. It could be quite terrifying when the trains came bearing down suddenly from around a bend. Anyway, sometimes the trains would be carrying green-coated bodies of Boeing 737 airliners, like large alien phalli; other times, there would be long lines of boxcars palimpsestically spray-painted over with a thousand codes, signs, warnings, and other idioms known only to the secret painters. I'm thinking of exploring such scenes in a future course called something like "everyday aesthetics."
Posted by Christopher Schaberg at 10:03 AM