How many words does it take to make a persuasive argument? What if images were used not just to supplement but to forward and develop an 'essay' in which words did not have obvious priority? I imagine a blog posting assignment that would require students to make an argument out of culled images (from Google images, camera phones, digital cameras, etc.), followed by a very deemphasized amount of written explication. For example: 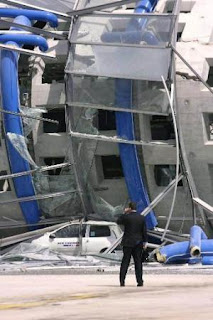 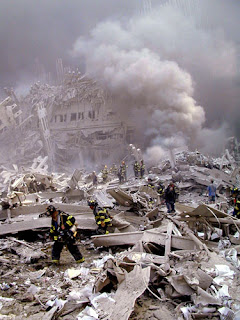 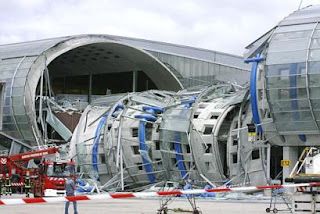 Two of these photos are of Dennis Oppenheim's art installation "Flying Gardens" (2004) at the Sacramento airport, two photos are from 11 September 2001, and two are of a collapsed section of Charles de Gaulle airport outside of Paris (23 May 2004). In each of these pairs, one photo was taken from a personal camera phone. My argument is that post-9/11 airport aesthetics—ranging from visual art to camera-phone photojournalism—reference the images produced by the spectacle of 9/11.

This aesthetic trend comes through literature, as well. Don DeLillo’s 2007 novel Falling Man imagines the videotaped specter of a 9/11 hijacker-in-training. Hammad, the terrorist-to-be, dwells on his own spectacular exposure two times: “He watched TV in a bar near the flight school and liked to imagine himself appearing on the screen, a videotaped figure walking through the gate-like detector on his way to the plane” (173). And a few pages later: “When he walks down the bright aisle [of a supermarket] he thinks a thousand times in one second about what is coming. Clean-shaven, on videotape, passing through the metal detector” (177-178). This literary scene alludes to the widely disseminated photo of Mohammad Atta clearing airport security in Portland, Maine:

There are ties between the ways that airports and terrorism are rendered aesthetic through contemporary visual media.

Posted by Christopher Schaberg at 12:48 PM