To Be or Not To Be Kindled

The email I received from Amazon.com this morning really tried to make me feel like I was missing out on something. As someone who "enjoys purchasing books from Amazon," they just thought I'd like to know that "there are now over 260,000 books, magazines, newspapers, and blogs"...this implied that said texts are available for the Amazon Kindle, which is always connected through 3G wireless so that one can download "anytime, anywhere." With objects like these, who needs imagination?

I am curious but hesitant about the Kindle. I have thought seriously about the potential advantages of these devices in the literature classroom. There would be almost no excuse for students not having their texts with them. Maybe reading would be fun for all. And look how easy it is to hold a Kindle: 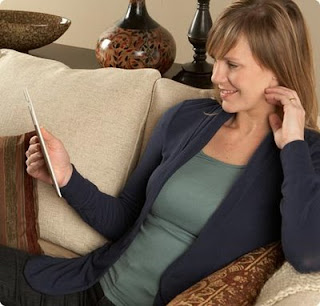 Yet if you did not know what to look for, this image would be a cipher: is she gazing at a mystic tablet...or at her hands...or at a mirror (i.e. herself)? It is almost as if 'it' isn't there at all. Such minimalism certainly could uplift the spirits of college students who are used to schlepping around five-pound Norton anthologies. What would such a class feel like, in which everyone had the same slick little machine for reading? (Furthermore, could we get some of those couches and throw pillows for the classroom? Those unergonomic chairs are not helping the situation.)

The picture in my email was slightly more instructive, if also eerily vacant: 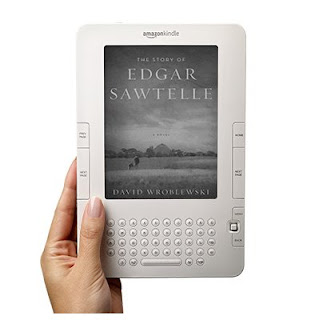 What bothers me about this image, though, is the white border around the device, not to mention the disembodied white hand; these make the Kindle look hermetically sealed in a world of its own, as if one can so easily achieve the uninterrupted time and empty space for reading that the cover page alone would evoke a sort of rapture. Amazon notes that the battery can last so long that one can "read for days without recharging." Could Kindles really guarantee a new era of learning, a promised land of literature students seduced into slow reading via fast connections? Practically speaking, does the energy required to build and power Kindles offset the energy required to produce (and transport) paper books? Is white the new (same old) green?
Posted by Christopher Schaberg at 8:51 AM