The problems with Pixar’s latest film Up are primarily formal ones. These include the onslaught of events, and a virtual saturation of characters.

The events in Up are sequenced irregularly and create strange senses of importance: for instance, the breaking of chocolate bars takes up more time in the film than a trans-hemispheric journey. A rare bird turns out to be rainbow colored, in case one has missed the colorfulness of the house or the vast cluster of helium balloons that provide it with lift. The events that are the best in the film achieve a majestic quality of slow time that could have been maintained throughout—such as the excruciatingly drawn out, diagonal ride of an electric stair-chair descender. This film really only needed about four events; as it is, there are dozens of events that fill out the plot, and too many of these events flit by so quickly that they cannot be substantive, and therefore are throwaway. More of the story's time could have been given to the defiance of urban sprawl, the isolation and domesticity of unregulated air space, and the spectacular vistas that we see so well in a few scenes early in the film.

When too many characters flood the plot, narrative sensitivity and attention to detail can tend to be dampened. In this case, the gradual introduction of more and more characters climaxes with a canine infinitude that is more ridiculous than funny. In a film like Danny Boyle’s 28 Days Later, hoards of running, red-eyed humans gone mad works; in a film that should remain skyward, such as Up, hundreds of talking cyborg dogs on the ground do not work so well. This character splurge rather ruins the conceit of an animation film, wherein anything is possible—which is precisely why some things should not be done. Restraint would seem to be the key to digital storytelling.

Finally, a missed opportunity: an airline or aircraft manufacturer could have benefited from a case of ingenious 'product placement' with the ballooned house seen from an airliner cruising by, people gawking while sipping small cups of soda. Here are some rough ideas: 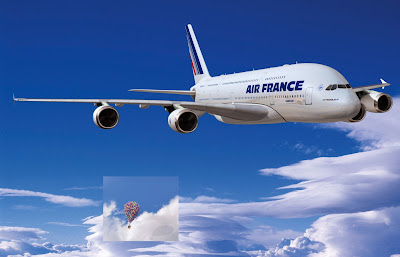 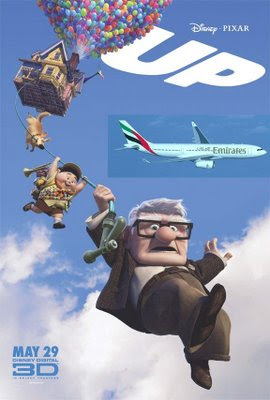 Up made me nostalgic for the quiet, richly intertextual and darkly comical Wall-E of last summer. Or maybe it just exposed just my penchant for the post-apocalyptic genre, which I plan to teach a class on this coming fall.
Posted by Christopher Schaberg at 8:06 PM