The Nonsense of Air Travel 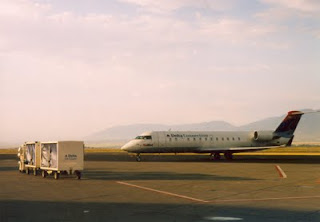 A NY Times article reported this week on how airlines are having to "rethink" First Class and Business Class, because they are too expensive to maintain as is. United, we are told, is considering a new class of service just below Business: it will be called "Premium Economy." Are we supposed to forget that this has existed in effect in the guise of "Economy Plus" for several years now? Rhetorically speaking, how does the flip of Economy and the shift from Plus to Premium constitute a serious 'rethinking'?

The article goes on to illuminate the state of air travel as such:

“In building up their premium classes, airlines have been building themselves a castle in the air that’s ultimately unsupportable,” said Peter Morris, the chief economist in London for Ascend Worldwide, an aviation consulting company. “Unless the business world carries on expanding its needs for these services, the castle, to some extent, will come crashing down.”

Wait: when is a "castle in the air" ever 'supportable'? (When it is an Airbus A380?) Furthermore, can one even imagine the sight of a castle in the air crashing down only "to some extent"? I cannot picture this, as hard as I try. It seems as though the popular discourse of air travel is approaching a surrealist aesthetic. Is there a threshold to such nonsensical language in the realm of something alleged to require a certain technological precision (e.g., flight)?

Another article (can we call these email-in interview pieces "articles"?) discusses the subject of manners on planes. Larry Winget expounds,

I don’t know what people are thinking when they travel nowadays. It’s like they leave their brains in the airport parking lot, and forget about common sense and courtesy.

Initially, one might be inclined to agree with Larry Winget's sentiment. The article goes on to narrate three episodes of bad manners on a plane; in two of the cases, Larry Winget intervenes, once with comic wit and once with a firm hand. Larry Winget's anecdotes are solid evidence for the tattered state of air travel: on planes people are rude, generally self-absorbed, and when they do communicate with one another their tempers are short, to say the least. Larry Winget emerges as a civilian arbiter of such situations. But Larry Winget looks like a pretty big guy, and kind of imposing; there is a colorful picture of him next to the article to prove it. This article seems to imply that what we need is a citizen task force, a sort of ad hoc brigade of unofficial (but serious) 'air marshals':

I am really trying not to let people’s behavior get to me. Most of the time, I keep my sense of humor, take lots of deep breaths, read a good book and don’t let the idiots get me down.

But sometimes, you just have to take a stand.

What are the limits of this injunction to "take a stand"? What brute force do we condone when it comes to flight? At what point is the rational, self-controlled liberal subject allowed to dominate, to flex within the aluminum-thin structure all around?

Perhaps literature can instruct. Larry Winget posits a civilized coping mechanism for this context: "read a good book" in order to avoid being annoyed by others on the plane. But what does one do when 'good' fiction reflects the absurdities of air travel? We would seem then to be caught in a möbius strip, or on an infinitely rerouted trip. Last week's short fiction piece in the New Yorker, "Land of the Living" by Sam Shepard, stumbles into this problematic terrain. Shepard begins this sardonic vacation story in the drab interior of a sweltering airport in Mexico. At one point the narrator observes:

We’re being herded, shoulder to shoulder with all the other Minnesota “snowbirds” frantically fanning themselves with their customs forms.

The familiar use of an airport setting to begin or end a story relies on what I elsewhere call "the poetics of no-man's land." Here, this involves a figurative disjunction between the "'snowbirds'" and the 'herding' taking place: animality is plainly overdetermined in the locus of the airport, and the setting resembles Larry Winget's worst nightmare: humans stripped of humanity, bumbling along, trying to get somewhere. What is the end of this spectrum? Sheer animality, or death? Later in "Land of the Living," during the characters' return trip, an unexpected landing at the St. Louis airport suggests that the end of flight is mortal death—which is to say, figurative evacuation, literally. Perhaps, then, the nonsense of air travel anticipates a more general, final vacation.
Posted by Christopher Schaberg at 12:07 PM