A little story of mine was in The New York Times last week: "A Night Spent on the Tarmac, With No Complaints." It made an especially nice coincidental pairing with another topic of the moment: 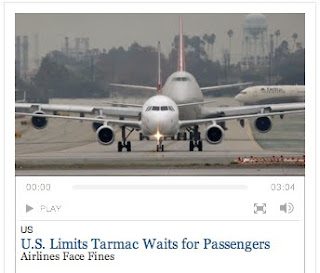 As if on cue, the past few days have offered a series of drab taxiway views that reflect a lingering preoccupation with the bleak drama of air travel, something people seem to crave and yet find revolting at the same time: 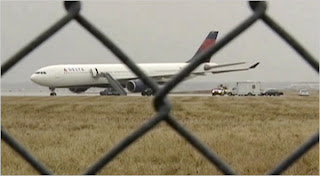 The philosopher Martin Heidegger once described the concept of "standing reserve" by evoking the image of an airliner waiting on the taxiway for takeoff. I wonder if airliners still hold such promise in terms of being able to illustrate philosophical ideas.

The recent headlines in the news and their accompanying taxiway views have led me to imagine a class I would like to teach on the discourse and imagery of the postmodern airliner. Don DeLillo's White Noise would offer an apt point of entry: in one section of the novel, DeLillo writes about a group of passengers who have just barely survived a plane crash. The survivors mill around the airport, unable to quite leave, opting instead to hear their story of near death recounted aloud by one of the haggard passengers. DeLillo writes, “They were not yet ready to disperse, to reinhabit their earthbound bodies, but wanted to linger with their terror, keep it separate and intact for just a while longer...” (91). For DeLillo, the near fatal plane crash throws bare life into stark relief, and yet it is also an experience doomed to be subsumed in a precession of simulacra.

Likewise, the current frenzy around near air disasters seems to reflect an attempt to grasp—only to lose touch with—what admittedly is a difficult subject: namely singular mortality, and all the physical risks and contingencies involved therein. In the monotonous taxiway views and in headlines such as "A ‘Nonserious’ Incident on Same Flight to Detroit," there is a tone of desperation, as if we are trying so hard to locate meaning in a subject that is rapidly losing distinction, its horizons gone gray.
Posted by Christopher Schaberg at 3:22 AM