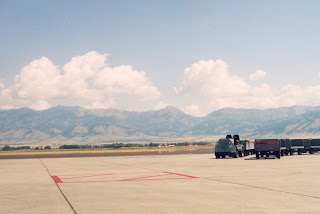 I took the above picture sometime in the Summer of 2002, when I worked for SkyWest Airlines at the airport near Bozeman, Montana. Sometimes I would take a camera with me when I went to work at the airport, and between flights I'd take pictures like this one, in which there is nothing to see, really—just the drab tarmac against vague mountains and building clouds in the distance, and some empty baggage vehicles awaiting the next arrival.

One thing that has always struck me as odd is how people tend to talk about airports as awful places (especially after a long delay or a lost bag)—but when I suggest that perhaps air travel will cease because of how awful airports are, the same people are appalled, and refuse to entertain this notion. Indeed, people are often all too willing to reassert the eternal presence of airports and air travel (or if not quite eternal, at least perpetual, leading forever into the future of human existence).

Reflecting the common sense perception of airports as horrid sites are airport scenes in literature, in which these built spaces often are denigrated for being worst-case places.

For instance, one of Annie Proulx's satirical tales in her recent collection Fine Just The Way It Is performs this sort of airport reading. The story is called "I've Always Loved This Place," and it narrates a hilarious post-modern (or really, we might say post-western) Devil who rides around Hell on a golf cart and comes up with the idea "to upgrade the current facilities" (36). One of his plans is to renovate "the Welcome to Hell foyer" to include the "combined features of the world's worst air terminals, Hongqiao in Shanghai the ideal, complete with petty officials, sadomasochistic staffers, consecutive security checks of increasing harshness, rapidly fluctuating gate changes and departure times"...all of which ending with, "finally, a twenty-seven-hour trip in an antiquated and overcrowded bucket flying through typhoons while rivets popped against the fuselage" (40). The "finally" here takes us back to the everyday paradox of air travel, which is that the things that passengers (and laborers, for that matter) tolerate for the sake of air travel seem to be forgotten fairly soon after a travel stint (or a work shift) is complete. Or if not forgotten, the absurdities of airports get left in the baggage claim of the mind, where one can retrieve the stories at will, but these stories never quite accumulate into a cumulative critique.

What does Proulx's evil airport figuration have to do with Wyoming? This is a complex dynamic, something I am writing about in my current book on airports: the convergence of airport aesthetics and environmental awareness—here, the way that airport commonplaces become a foil for the rugged, pastoral beauty of the American West that Proulx is so effective at complicating, and exposing for its ideological pitfalls. Airports evoke or spur spatial awareness in all sorts of ways—usually not romantic, often more existential or even post-apocalyptic, and this awareness is all the more sensitive around airports that are supposed to deliver passengers to privileged spaces, like Wyoming.

I noticed another instance of an airport paradox in Joseph O'Neill's novel Netherland. In this book, one particular airport scene follows the logic of what I call "terminal immaterial": how in literary representations airports can be put to use in such ways that the actual sociality and functional operations of airports do not even need to exist—the airport simply makes empty, open space for other observations (and usually grim ones, at that). Here is the passage from Netherland:

We turned south onto the unpopulated, quasi-rural section of Flatbush Avenue, where the road was lined with barren trees. Half a mile or so down, Chuck swung left through a wide gateway and onto a concrete private road. This lead to a no-man's-land of frozen bushes and scrubland. Another turn, leftward, led to an immense white emptiness. The snow had not been plowed from this portion of the road, and like a wagoner, Chuck steered and bumped us along in the hardened ruts of old tracks. A desolate, complex of buildings—warehouses, a tower—was now in view on the left. The sky, aswirl with fleet, darkening clouds, was magnified by the flat null steppe that lay to the east. If a troupe of Mongolian horsemen had appeared in the distance I would not have been shocked.

Chuck, both hands on the wheel, spurted the Cadillac forward. "Floyd Bennet Field, Brooklyn," he said.

As he spoke, the tower assumed a familiar outline. This was once an airfield, I realized. We were on an old taxiway. (80-81)

In the rambling first paragraph of this passage, the airfield lurks and looms at both the periphery and eventually as the center of the scene—the airport serves as a "barren," open space that actually startles the narrator into uttering "Jesus." For O'Neill, the airfield stands as a long detouring pathway to introducing the character Chuck and his obsession with the sport of cricket. The leveling out of landforms, and the stock masses of the old airport, create empty space and yet firm structure for developing the character of Chuck. The airport is simultaneously a blasted wasteland, and fertile narrative ground. The airport is counter-intuitively cast as an organic zero level: an "immense white emptiness"—almost a blank page. Idyllic, individualistic fantasies and the hard realities of cosmopolitanism are in friction throughout this post-9/11 novel; in this oblique airport scene, Western civilization is at once wiped away and exposed in stark, skeletal form.

One might also note the offhand, Orientalist gesture in both Proulx and O'Neill's airport readings: in each case, a specter of exoticized, 'Eastern' otherness is called into being by the airport space. The American West (or Western State) is vaguely threatened by a phantasmagorical Asia, either in the form of a super chaotic bustling international airport, or by ethnically authentic "horsemen" riding into the open terrain. This undercurrent suggests an anxiety about global space and flows, and thus there is a glimmer of something like ecology: how airports materially express the migrations and populations of our species. Here is another seeming airport paradox: airports comprise incredibly elaborate networks of culture, and yet at airports we can also locate a cipher for nature: how a species 'advances', and possibly, how it might fade away.