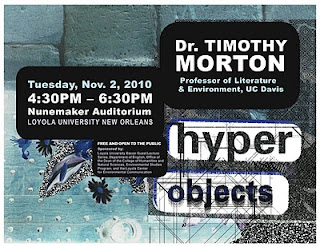 This week I am hosting one of my mentors from UC Davis, Timothy Morton, who is giving a talk at Loyola University New Orleans. His talk in entitled Hyperobjects, and it deals with, in Tim's words, how

...science, industry and technology have created and discovered phenomena that are massively distributed across time and space: the BP oil slick, global warming, evolution, nonlocality (in quantum theory), radiation.... These “hyperobjects” pose huge problems for humans, not only in terms of how to deal with plutonium or global warming, for example, but also in terms of how they defy normative understandings about what “objects” are in the first place. In particular, hyperobjects compel us to think beyond the confines of anthropocentric philosophy. I shall explore how to address the challenges hyperobjects pose.

The talk stems from Tim's most recent book, The Ecological Thought, which argues that we need to radically rethink the mesh of interconnectedness that is existence. But I suspect Tim's talk will also push into new territory—namely the ground (or non-ground) of "object-oriented ontology," or what goes by OOO for short. (There's an impressively clear definition of OOO here.)

In my critical theory course this semester, with Tim's work in mind, I have been trying to plot some anticipatory moments in earlier texts.

So, for instance, in "The Work of Art in the Age of Mechanical Reproduction," Walter Benjamin posits: "The equipment-free aspect of reality here has become the height of artifice; the sight of immediate reality has become an orchid in the land of technology." The 'here' in this statement is the culture where reproducible art is created for masses; Benjamin seems to be saying that in such a culture, it is rare to have an 'immediate' experience of 'reality', because people come to expect a certain type of heightened artifice as reality. (One wonders if iPhone apps and the like function as a contemporary analog? It's somehow more stimulating to watch a machine identify an overheard song, than to remember or figure it out myself.) Yet, the ecological thought pushes through this apparent divide, and finds the orchid and the land of technology to be intimately enmeshed, even growing out of one another. It's not that Benjamin was wrong, but rather that he sensed the limits of the concepts in play: reality, artifice, immediacy, technology...they were breaking down and congealing around him. It's as if Benjamin intuited the ecological thought.

This is a barely conceivable thought. It's like something cooked up by Sigmund Freud, who suggested that "an unconscious conception is one of which we are not aware, but the existence of which we are nevertheless ready to admit on account of other proofs of signs." The ecological thought emerges this way: by associations and metonymic chains that spread out and take on an overwhelming scope.

In a different context, when Frantz Fanon ponders his fraught subjectivity and states, "…in one sense, if I were asked for a definition of myself, I would say that I am one who waits; I investigate my surroundings, I interpret everything in terms of what I discover, I become sensitive."—this too reminds me of a moment akin to the ecological thought. There is a weird sense of hesitation implicit (or really, explicit) in this that seems to belie the urgency of the situation (for Fanon, "the fact of blackness"; for Morton, the ecological catastrophe). In Morton's words, "We shouldn't be afraid to withdraw and reflect" (ET, 9).

Fredric Jameson's "Postmodernism and Consumer Society" likewise contains a moment arguably anticipatory of the ecological thought, when he describes how certain new forms of representation stand "as something like an imperative to grow new organs to expand our sensorium and our body to some new, as yet unimaginable, perhaps ultimately impossible, dimensions."

It is as if Don DeLillo has this in mind, or is unconsciously channeling Jameson, when, in his most recent novel Point Omega, he writes:

…Something’s coming. But isn’t this what we want? Isn’t this the burden of consciousness? We’re all played out. Matter wants to lose its self-consciousness. We’re the mind and the heart that matter has become. Time to close it all down. This is what drives us now. … We want to be the dead matter we used to be. We’re the last billionth of a second in the evolution of matter. … Look at us today. We keep inventing folk tales of the end. … We need to think beyond this. (50-51)

Against what first sounds vaguely apocalyptic, I want to suggest that this is no simplistic imperative, nor is it dismissive of human thought or action. There is something importantly mind blowing happening here, and it touches everything. Does this sound reductively expansive? Yes, but I think it is from within this paradoxical feeling that politics get tempered and beliefs are humbled, and the ecological thought can become praxis. What this praxis will actually look like? Well, we don't know yet. As Morton notes in the introduction of The Ecological Thought, "Like archaeologists of the future, we must piece together what will have been thought" (3). In such a piecing together, we have our work cut out for us.
Posted by Christopher Schaberg at 6:42 AM