T-Rex in the baggage claim; flies on your body

My good friend Greg Keeler just sent me some pictures that he took in the Bozeman airport, around the baggage claim. This one made me pause: 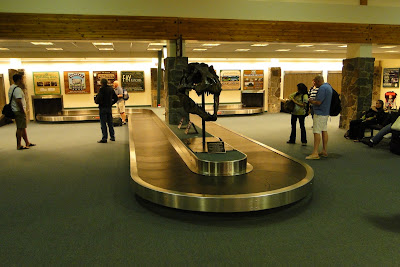 What is that T-Rex doing in the baggage claim? The easy answer: Jack Horner is a local. But on another level, it's kind of hard to take your own baggage too seriously when there's a reminder of geologic time gaping at you with open jaws. Airport art often implicitly critiques the earnestness of human progress.

This photo is apropos of the last chapter of my book on airports. In this chapter, called "Claiming Baggage," I look at how baggage claims are figured in all sorts of literary and cultural texts; I also puzzle over the evolutionary baggage of air travel, or how ideas of flight sometimes spur questions of ecology. A preoccupation with vast timescales is echoed by the strange appearance of the T-Rex in the Bozeman baggage claim, as if it is urging passengers to consider their current travel plans in light of the mind-blowing knowledge of species extinction and climate shifts.

I have been in northern Michigan completing my book and visiting family. I put the finishing touches on my book over the past week, and sent it to the publisher yesterday. So this morning, not thinking of airports or air travel any longer, I turned to my next task, which is to prepare for a seminar on David Foster Wallace that I'm teaching at Loyola in the fall. It's going to be a great class, with a stellar lineup of students.

I went down to the dunes by the beach to read, eager to think about new things. But it only took a few pages into DFW's newly published unfinished novel The Pale King before I was thrust back into the textual life of airports. The novel opens with the character Claude Sylvanshine sitting in the cramped seat of 8-B (exit row) on a regional flight from Midway to Peoria, en route to take his CPA exam. The prose is full of fantastic descriptions of in-flight minutiae such as this one: "Over the window was a stern injunction against opening the emergency hatch accompanied by an iconic triptych explaining how to open just this hatch. As a system, in other words, it was poorly thought through" (8). I wonder how much we might extrapolate from this latter statement when considering the culture of flight at large.

Small flies kept alighting on me as I read; it is that time of year on the Great Lakes shoreline. 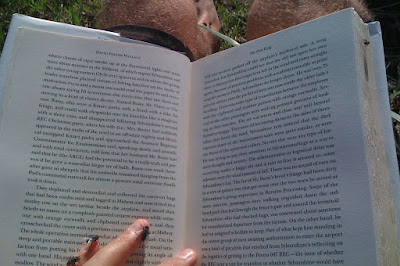 A couple people walked by on the beach, waving their arms hysterically and swatting flies. They called over to ask me if the flies were driving me crazy—I said, "No, not really." And I was being honest. It occurred to me that being covered with flies is an apt way to read David Foster Wallace: the bodily sensation somewhat parallels the brain-feel of reading DFW. And I don't mean that it's bad, at all—just that it sort of tickles and constantly distracts; it's not quite agitating, but on the verge of it in thirteen places at once. There's also something about it that makes you feel tinglingly alive, and radically connected to other life forms.

But I think what people don't like about seeing flies crawling all over their bodies (even when they are not biting) is this: you suddenly perceive yourself from an odd distance as an organic, decomposable object. This uncanny realization is understandably unsettling. David Foster Wallace was able to isolate and articulate such feelings in everyday scenarios, such as the totally banal regional flight "yawing" as it makes its routine 50-minute hop from Chicago to Peoria. Maybe these aren't terrible feelings to have, though. Maybe we just need better systems, and better signage. Maybe having a T-Rex in the baggage claim is a start.
Posted by Christopher Schaberg at 9:38 AM