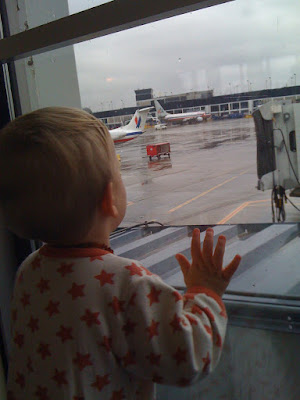 Tarmac watching at O'Hare
Carolyn Kellogg wrote a very nice review of Checking In / Checking Out in the LA Times Books section.

And Nicole Sheets gave the book and Airplane Reading a kind mention at Wanderlust and Lipstick.

Meanwhile, I've been experimenting with Twitter as a way to draw people to Airplane Reading, and I'm quite enjoying the formal constraints, as well as the aesthetic and philosophic possibilities nestled within the form's forced compression. I know, it's not like it's a 'new' tool or anything; but it's often intimidating to start into new media forms, and gratifying when they start to feel like you've got the hang of them. I've particularly liked playing with the photo-essay possibilities granted by Twitter, and I've been posting photos at Twitpic.

I'm also starting to rework my long essay on airport/aircraft seating, which I will be sending out to a journal for review in March. I'm starting this essay with a reading of the psychoanalysis of flight in the opening Claude Sylvanshine chapter in The Pale King. I'll be presenting some of this material at ACLA in Providence this coming spring, in a seminar on David Foster Wallace.
Posted by Christopher Schaberg at 7:28 AM