Brad Pitt at the Airport 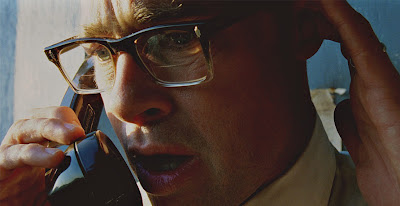 So Brad Pitt didn't win an Oscar. It's really not that surprising, after all. As my friend Robert Bennett has speculated, Pitt is considered at turns too popular or too artsy to be viable Oscar material. Which is really a shame, because he should have won easily for Best Actor; in his big roles this year, in The Tree of Life and in Moneyball, he gave brilliant and nuanced performances.

And, for my own particular interests, both of these films involved key scenes of Brad Pitt at the airport. In the shot above, for instance, the reason Pitt is holding his hand to his ear while talking on the phone is because he's in an airfield office, and there's a deafening airplane idling on the tarmac right outside. If airports often stand for human progress, Pitt's defeated character struggling to communicate at the airfield is one of the most pointed and powerfully suggested critiques of human hubris in the film.

For more on Brad Pitt at the airport, you can read my guest author post on the Bloomsbury Literary Studies blog, which was posted today.

This spring I'm starting to research Brad Pitt's interests in architecture and sustainable design, particularly as these interests have been integrated into the Make It Right foundation homes in the Lower Ninth Ward of New Orleans. And so here's what I propose: if we can't award Brad Pitt an Oscar, perhaps we can dedicate part of a new terminal at Louis Armstrong airport after him. Something with a nice ring to it, like the Brad Pitt Pavilion.*

*And then, if we want to follow a dark flight of fancy: at some point in the future, after humans have successfully served their time on Earth (or 'served the Earth', à la Rick Santorum), when wild alligators are crawling around the ruins of our airport as it slowly sinks into the gulf, and as the words Brad Pitt Pavilion etched in stone are obscured by competing cat's claw and morning glory vines, history will then uncannily recall those scenes in Twelve Monkeys after Pitt's ingenious madman Jeffrey Goines frees all the animals from zoos, and they re-inhabit the urban wilderness...
Posted by Christopher Schaberg at 6:10 AM