This post is a sneak peek of part of an essay of mine that is being published in a book called Beauty, Violence, Representation (as part of the Routledge Research in Cultural and Media Studies series). My chapter adapts Arun Agrawal’s term "environmentality" to think about how air travel disasters are represented and mediated in contemporary U.S. culture.

Agrawal uses the term environmentality to describe how people become political subjects through the creation and dissemination of environmental policies and ecological knowledge.  Agrawal demonstrates how, as land and resources become objects of statistics, ordered consumption, and conservation, environmentality emerges through people becoming certain kinds of subjects: environmental subjects.  This is not necessarily a specific way of inhabiting or treating an environment, but rather accounts for how people gradually become implicated in and subject to specific cultural and political designations about what an environment is in the first place.

A couple pages into my essay, I discuss a visual text from the everyday culture of flight that helps illuminate how I employ this critical term. Environmentality in the sense I am using it is apparent on safety briefing cards in commercial airliners, where the inside technologies and outside ecosystems are juxtaposed stark form.

Segment of a safety briefing card from an Alaska Airlines MD80, circa 2003

On this Alaska Airlines briefing card, an idyllic alpine scene is depicted outside of the crash-landed aircraft. Let us suspend disbelief for a moment concerning the implausibly intact landing gear or the slim chances of such a graceful emergency landing in rugged terrain. Let us focus, instead, on the outside environment that appears in this info-graphic. Upon first glance, the scene simply suggests an open space that one can dash into after an emergency landing.

And yet, as we consider further the informational incongruities located in these processual frames, the contrasting images become more curious. The technical diagrams detail various contingency escapes from the aircraft, including materially specific directions about how to deploy the tail slide, for instance. These diagrams are somewhat offset by boldly rendered (if technically unnecessary) landscape features, such as fecund foothills and sublime mountains jutting up on the horizon. What is the function of this highly aestheticized outside? My theory, as evinced in this example, is that there is a critical relationship between ideas of environment and technicalities of air travel disasters.

Lingering on this emergency briefing card, we can see how the potentially harrowing event is tied to an environmental-aesthetic register: the sky is intensely blue, and the dramatic snow-peaked mountains give way to verdant forests—it is an encompassing ecosystem rendered in miniature. The beauty and eco-logic of a world beyond thus somehow buttresses the violence of the plane crash. Outside the wrecked airplane and its tight seating configurations, one finds oneself in an ecological tabula rasa, a space open to inhabitation and free mobility.

The shattered dream of the passenger traveling by air ends up on the ground, and the violence of the crash becomes a portal into a pristine, beautiful wilderness. The air travel disaster becomes a zero point for a survivalist fantasy, a reset button that places the human subject back in a pure state of nature, like Robinson Crusoe on his island. In other words, the techno-culture of modern air travel is subtended by a mindset of naturalism, and by an idea of beautiful wilderness as an always-available foundation point where human progress can begin afresh.

Here are the rest of the images that the essay refers to: 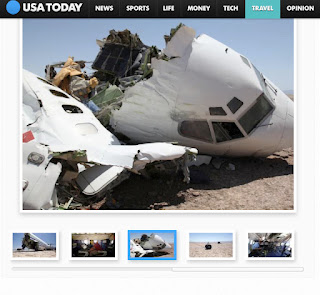 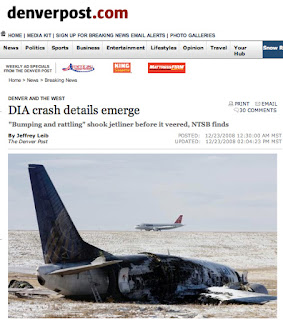 Continental Flight 1404 as shown on DenverPost.com 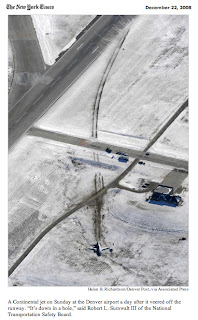 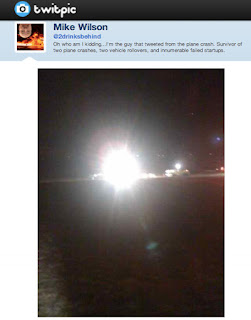 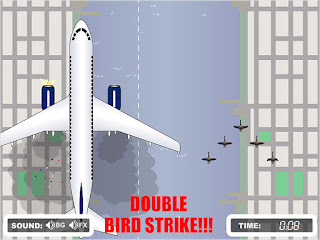 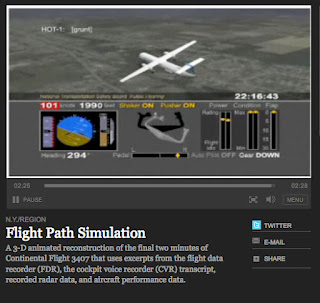 Posted by Christopher Schaberg at 1:29 PM