Writing about the Dreamliner 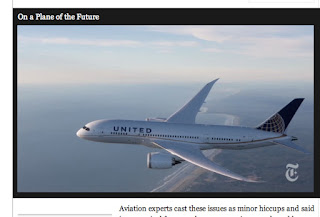 I'm writing about the Boeing 787 Dreamliner.

I'm thinking about this aircraft's composite promises and early reception.  I'm thinking about its innovations as well as its expected reiterations.  Its electrical shorts and its ultra-sleek toilet, its LED ambient interior lighting and its windows that are a little bit bigger than other commercial airliners' windows.

The Dreamliner (what a name!) has been called "a plane of the future," but it looks surprisingly familiar.  In this world, at this stage of species-being, what hopes and realities do we find in a new aircraft and its attendant aura?


Posted by Christopher Schaberg at 6:00 AM