What I Did This Summer: Connections & Reconnections

This summer has been a series of connections and reconnections for me. I've been up in Michigan, where I had planned to work on my book on the region, which I'm tentatively calling Notes from the Sleeping Bear. But instead of writing much on this area, I did a lot of what we might call "field research." More on that later.

The summer started with the ASLE conference, where I connected with some terrific people, including Jeffrey Jerome Cohen, Eileen Joy, Daniel Burke, Lowell Duckert, Steve Mentz, Cary Wolfe, and Ron Broglio. I also reconnected with some old friends from UC Davis: Clara Van Zanten, Andy Hageman, and Megan Kaminski. The conference was fantastic, and I look forward to the next one in 2015.

For most of the summer, whenever I've been at my computer, I've been working on three significant editing projects. The first and most time consuming has been the Object Lessons series, which Ian Bogost and I launched in June. We've published six essays in The Atlantic's Technology Channel so far, and have five books under contract with our publisher, Bloomsbury. Here is the stunning cover art for our first book on the Remote Control, by Caetlin Benson-Allott: 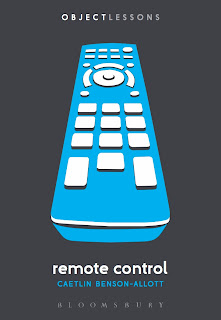 Working on Object Lessons—responding to proposals and queries, and editing submissions—has lead to many new connections with a wide range of writers. When Ian and I conceived of this series, two of our goals were to create a different kind of forum for pithy intellectual writing, and to inspire an alternative form of publication for academic work. Based on my interactions with many interested and excited potential authors over the summer, it appears that Object Lessons is finding an audience and fostering productive and unexpected connections between academics and general readers. It's also been a place for reconnections—for example, it was so gratifying to work with my great friend from graduate school, Kara Thompson, on her sharp essay on blankets.

Another ongoing project has been editing book reviews for the New Orleans Review. I've always loved the form of the book review and its variations: essay-length or brief, anonymous or very personal, research oriented or reader-response in nature. It has also been a thrill to watch my colleague Mark Yakich explore different formal possibilities for the print journal, while simultaneously revamping and boosting the online presence of the journal. The journal has a long and admirable history in terms of what it has published over the years, and it has been fascinating for me to see it up close as a testing ground for how literature can fit into, adapt with, and respond to new media forms. Here, too, I've connected with a variety of writers who've written brilliant reviews and introduced me to books I probably wouldn't have stumbled across otherwise.

Editing is hard work, with a steep learning curve; I've gleaned a ton from Ian and Mark as I've edited essays, reviews, and book proposals over the past several months—and really over the past couple years,  over at Airplane Reading. It's one of the under-appreciated parts (even arts) of the profession, both on the academic side and on the publishing side of things. But having a good editing experience—as writer or as editor—is very satisfying when the final version of a piece is published.

Finally, the third editing project is the book I'm currently finishing, Deconstructing Brad Pitt (forthcoming from Bloomsbury in September 2014). I've reconnected with my good friend Robert Bennett from Montana State University-Bozeman, who I asked to co-edit the book with me. The project was becoming something of a bear (think insomnia laced with haunting visions that veer between Tyler Durden and Joe Black), and collaborating with Robert has reinvigorated me around the book and we've come up with a compelling new framework for the project, which will highlight and analyze the actor/celebrity duality of Brad Pitt. I've also been writing my own chapter for this book, which has turned out quite different than I'd planned, but far more curious and fun.

Speaking of Montana, let us call to mind Pitt's performance as Paul Maclean so I can tell you about another reconnection this summer. When I lived in Bozeman during my Masters program, I fished nearly every chance I got in the rivers and creeks that wind through the Gallatin Valley. I usually fished with my mentor and buddy Greg Keeler. Anyway, this summer, after a hiatus of ten years, I got out my fly rod and reconnected with it, with fly-fishing. And I found, like Hemingway's Nick Adams, that I "felt all the old feeling." I get a little obsessive about fishing, and it has been therapeutic to stand for hours in the water casting flies. This has also done double-duty as the "field research" I mentioned earlier. I'm situating the essays of my Michigan book around specific sites along the Sleeping Bear Dunes National Lakeshore, including the lakes and rivers I fished in as a kid. So as I've been fishing I've been writing sentences in my mind. But I've also realized over the summer that this Michigan book is probably a ten-year project. As I'm discovering, it's actually really difficult to write about 'place' in a critically self-reflexive way. I started writing something about poison ivy, but it has spread into a weird meditation on the existential paranoia of itching and the ecology of creeping vines. It's nowhere near finished, but hopefully it will end up as part of the book.

One of the places I tried to write about, but where I ended up getting bad poison ivy instead.

Then there was an unexpected and generous invitation from Robert Appelbaum at Uppsala University to give a plenary talk at this fall's Nordic Conference of English Studies, which is organized around the topic "Places and Non-Places of English." I'm completely giddy about this opportunity, and have been working on a talk that weaves together several recent threads in my thinking about airports and air travel in the American imagination.

In a couple weeks it's back to school, and in the meantime I'll be busy putting the finishing touches on my course syllabi for the term. I've got some exciting ideas to try out in the Literature & Environment course I'm designing for this fall—more on this course in a future post.


Posted by Christopher Schaberg at 2:40 PM