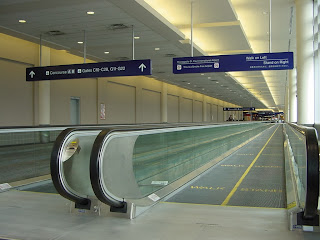 1. Lucy was scanned by the dynastic x-ray machine, and then she strolled into a simulated cedar grove leading away from the terminal.

2. A cheerleading squad assembled near the baggage carousel, waiting for shiny equipment to arrive in unremarkable duffle bags.

3. Stepping through a red glow, Lars inserted his credit card into the self check-in kiosk, and the computer retrieved his itinerary to LGA. Did Lars want to print his boarding passes?

4. The Starbucks line was long. There were only 9 minutes until Priority Boarding. Li hesitated, looking down the concourse toward gate 64.

5. Georgette knew the way to the Admiral's Club. She knew that there were two more moving walkways until she would see the frosted sliding doors.

6. Lena preferred Lufthansa because it was a good german airline, because the planes had blue tails and there was no better way to fly, really.

7. In the bathroom near the F gates, Paulo couldn't decide whether to use a paper towel after he'd washed his hands, or the Dyson Airblade.

8. Suddenly Robby was elated to discover an unexpected power outlet nestled between the Eames Tandem sling seats; his Samsung Galaxy would be charged for the flight.

9. Elizabeth deftly maneuvered her carry-on bag around the bookshelves and past the magazines, looking for something to read during the two-hour layover.

10. The garbage can at the juncture of the C and D concourses overflowed, and a Smoothie King styrofoam cup clattered to the ground.

11. Charlene loved to scold the passengers who reported their luggage lost. She scolded them hard, shaking her head as she processed each claim, entering information into the computer.

12. Four baggage carts were parked in a snaked line. One cart's vinyl curtain flapped in the jetwash of an Airbus taxiing away from gate E14.

13. The overhead speakers called for a Mr. Spartenbot to pick up a white courtesy phone. But nobody heard the announcement.
Posted by Christopher Schaberg at 7:19 AM