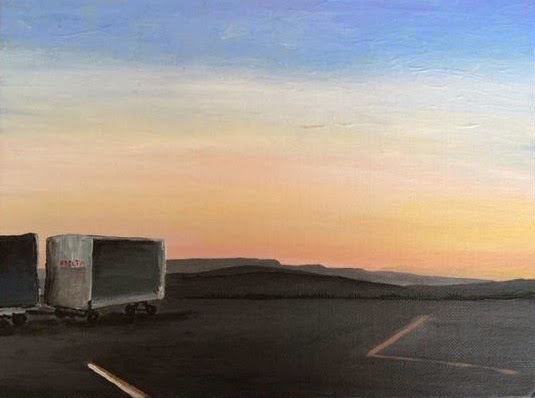 I've been thinking a lot about art lately. Cleaning up my office recently, I stumbled on some old paintings I made in Bozeman and in Davis, between ten and fifteen years ago. The one above is of the tamarc at the Bozeman airport, where I worked and even once spent the night. When I lived in Bozeman I watched my friend Greg Keeler turn gloppy acrylic paint into eerie post-western landscapes (like this one). I mostly painted moody little watercolors and gouaches of the mountains, which I called "visual haiku" and sent off to friends and family in the mail. They were really very little: usually no bigger than 1.5" by 3" and often smaller. Here's one: 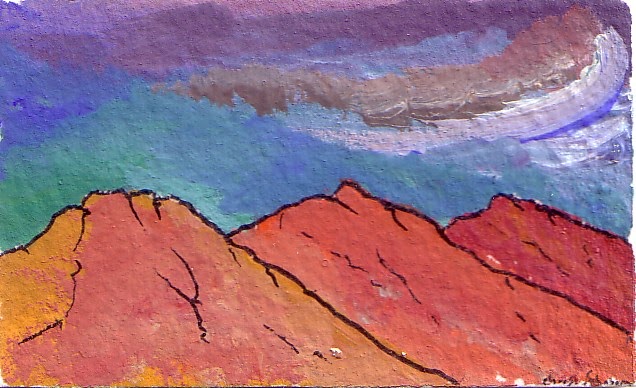 Later, when I was a grad student at UC Davis, I was lucky to take an MFA studio course with Mike Henderson, and the art students in that class were on fire with brilliant ideas, and were patient with my ramblings about airports (I was working on my dissertation at the time, about airports in American literature & culture). So patient, in fact, that for the final project that semester, Mike had me read one of my essays about airports while he played a partly ruined guitar and the other students played improvised instruments—and then, to top it off, Mike took the recording of this performance and played it in his car during a rainy night while he drove in circles around the Oakland Airport arrivals and departures loop, all of which is captured on film from his videocamera which fell over on the dashboard as he was driving, and so for many minutes you hear the background noise of the studio session while watching the sideways airport signs through the swish swishing of the windshield wipers. I'm not exaggerating. I still have a copy of the VHS tape Mike gave me, in a drawer in my office (and no way to play it). This was a true graduate school experience in northern California, am I right?

Also during my time at UC Davis, I was invited to take part in a meeting of the Sacramento Metropolitan Arts Commission, when they were were discussing plans for new public artworks to be placed in the renovated Terminal B at the Sacramento airport. Part of my dissertation research involved a public tour of the Sacramento airport art (before the new terminal was finished), which I later reincorporated into my book The Textual Life of Airports. Airport art fascinates me for the ways it plays off the primary experience (and spectacle) of flight.

But less nostalgically, more tangibly and in the present: my son Julien (now four) likes nothing better these days than to work on elaborate art projects at his craft table, turning our kitchen into a glorious mess every few hours. We can barely keep up. These projects range from simple ink drawings and slightly less simple paintings, to sculptures made out of ribbons cut from a giant map and a collage of photographs which we realized was Julien's rendition of something like proto-Instagram. 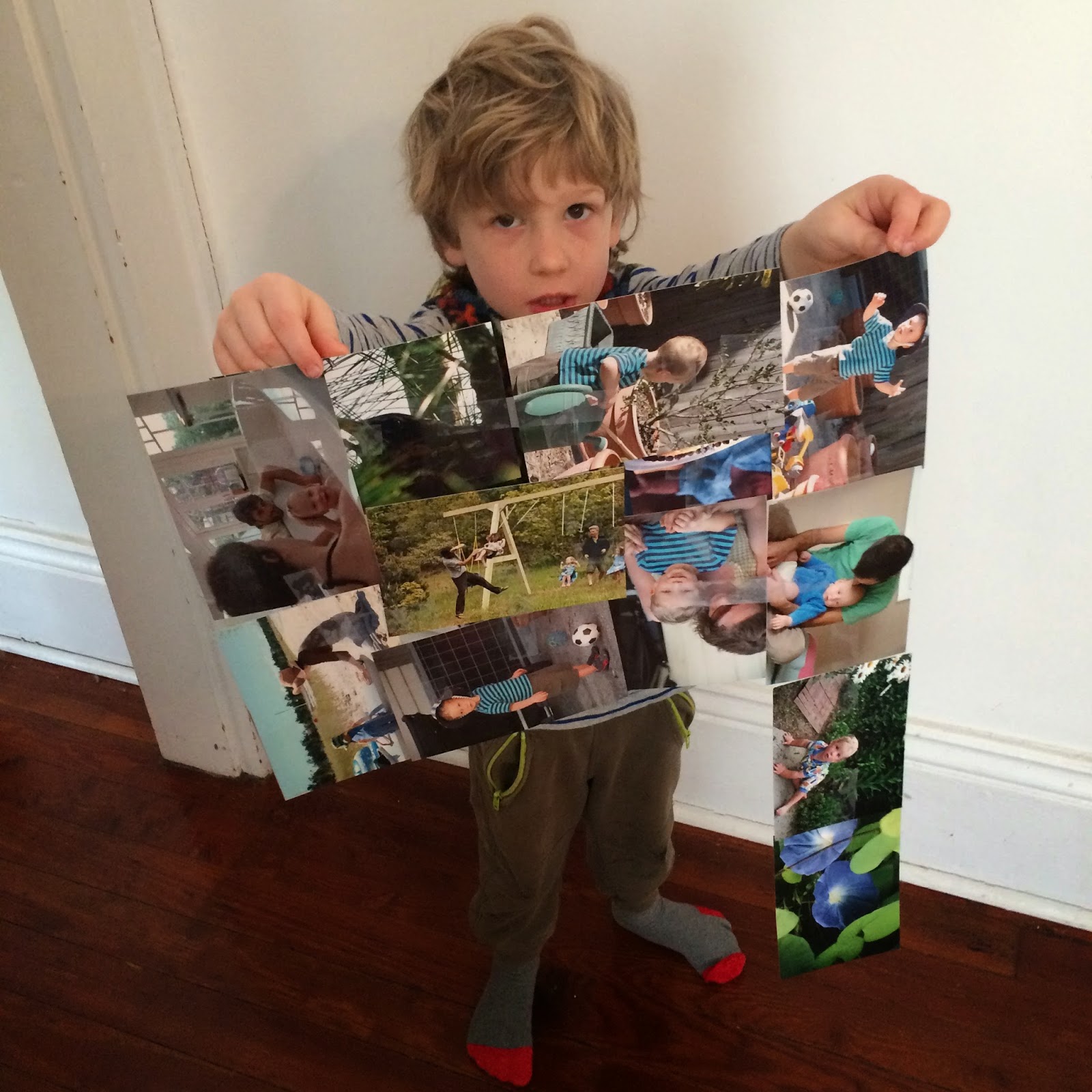 We think he got the latter idea from Instagram itself: he has been observing carefully as my partner Lara has been working on a new series of scrolling images that play with(in) the digital matrix, crossing lines and forms. (I guess Julien probably hears us talking relentlessly about the possibilities and pitfalls of social media, digital reproduction, art's aura, etc. etc. Walter Benjamin, you called it.)

When I showed Julien the work of Tara Donovan, we had to take a spontaneous trip to our neighborhood Walgreens to buy a bulk pack of plastic cups so Julien could try working with them. And after I took down our Julie Mehretu book and explained the scale of some of her works, we had to go to Lowe's and obtain a giant scroll of contractor's paper so that Julien could unroll it on the floor and get lost in shapes, lines, and meandering squiggles. (Don't get me wrong, I'm not just being romantic here: part of the thrill of this interest Julien has is purely pragmatic, on my end: it keeps him seriously busy for multiple hours at a time.)

Julien got on an architecture kick the other day, and now the floor of his room vaguely resembles the opening scenes of the film Wall·E, where you can't quite distinguish actual skyscrapers from the tremendous piles of rubbish. (When I get weary of his demands to build yet another tower, Julien lambasts me with the axiom, "Builders never give up!")

Last week as I was preparing for my seminar on David Foster Wallace, I glanced over at a small box of Legos that I keep in my office, for when Julien occasionally joins me there on the weekends. I had this sudden thought: Maybe I should take the Legos to class and ask my students to build and present concepts for their final projects! I didn't do it that day, but I think I will plan something like this next semester: get my students to make something, in another medium, before they start to write. Of course writing can be a form of art, too—but we often forget this, even in (sometimes especially in) college English classes.

Posted by Christopher Schaberg at 3:53 AM