Welcome to the Airport of the Real 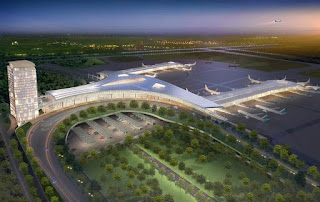 I wrote a piece for The Atlantic about the new airport under construction in my hometown. The new terminal is intended to be a "world class" structure.

I started writing this piece to better understand how the new airport would balance our uniquely local vibe with the more generic demands that commercial flight requires. But the article evolved into something quite different: an inquiry into how airports—and new airport construction projects, specifically—need to be thought about alongside the effects of climate change.

The day the piece was published, a reporter from a local TV station contacted me and asked me a bunch of great questions about this topic, a topic that gets easily hyperbolic and misunderstood. I've been mulling over several of the reporter's queries that really demand a bit more explanation. So here are some follow-up questions to the piece, and my further thoughts on the matter:

Do I think it was a bad idea to spend $1 billion on this new airport?

No, I don't think it was a bad idea at all. It will most likely be a great airport, when it opens. I'm excited to use it. (Of course, it will probably have some early hiccups—don't expect it to be perfect.) Then, after a few months, travelers will simply use the airport, and gradually forget that it was ever new. I think it was a good idea that we didn't spend $5 billion or $10 billion on a big showy architectural spectacle—even if it might have looked cooler. One of the points of my piece is that maybe a world-class airport for today should be modest—and as much as $1 billion sounds like (and is) a lot of money, it's also not nearly as much as it could be for a new airport. (Even the sparkling hotel in the above sketch was scotched from the final plan.)

A lot of cities are undergoing airport renovations and are similarly threatened by rising sea levels. What makes New Orleans different?

Climate change doesn't set New Orleans apart from all these other places—it connects us all more intimately and urgently. No city can make urban planning decisions as if they are isolated from the rest of the globe. What's different, perhaps, about New Orleans is that the city has experienced devastating storms and the effects of poor planning and drawn-out recovery, so we have all the more reason to be upfront, honest, and proactive about the likelihood of future disaster as we continue to build and live in this city that so many of us love. My piece ended up being nudged along by the nagging question of what it would even mean to build a new airport with climate change at the forefront of planning and construction. (And this is very much an open question.)

What advice would I give to the leaders involved in the new airport construction?

Perhaps there could be informational signage in the new terminal about rising sea levels, coastal erosion, or climate change. I know this seems counterintuitive to the promotional tenor expected within airports—but then, really, is it so different from the ad spots for the WWII Museum, just directed toward the future instead of the past? We could use the airport as a place for education and contemplation of how the world is changing around us, and how humans are implicated in these changes (whether or not we believe it). The word 'world' in "world class" airport might be something to take seriously as a topic to discuss, a dynamic thing not to be taken for granted or accepted as a given. In other words, our world class airport might offer an opportunity to reflect on the actual world, our temporary and fragile home. the real new MSY, emerging from the swamp

I've also wanted to post a link to something else that came out recently, and now I will—because it's related. Here is a piece at Sierra that I wrote along with three of my wonderful students, in which we reflect together on our Environmental Theory course of Fall 2017.

Climate change is not just a trendy topic or an abstract concern. It's a vital issue that a lot of my students are earnestly thinking about as they consider their futures. So I feel like it's part of my duty to teach and write with the realities of our world in mind, for the generations ahead that will live on this planet and hopefully learn to better coexist with the myriad other species and things that dwell here with us.


Posted by Christopher Schaberg at 6:13 AM