Further Reflections on the Flying V 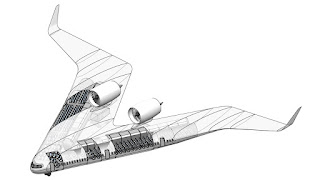 For Slate's Future Tense column I wrote about a concept airplane called the "Flying V." This is the idea of a new airliner that will be more fuel efficient; it is optimistically predicted to be in commercial service in two or three decades.

One "teaser" video showed the plane already pulled up to a jet bridge, and a worker ambling around the landing gear. This image makes the whole thing so remarkably mundane as if to suggest that it could happen tomorrow, if not already today. 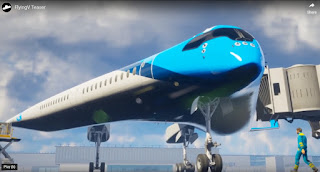 I remain skeptical. I think think the airplane is about speculating on a future that will look—more or less—just like the present. The different shape of the airplane is a token gesture toward as-if radical change. The engineering is admirable, and the design is svelte and appealing.

I made a mistake in my piece, assuming there would be window seats along the inner walls of each arm of the V fuselage (at least in the back sections). Yet sketches and diagrams of the airliner show the inside seats to be placed next to a sheer wall (inside which maybe electronics, fuel, cargo?), rather than having their own inner-facing windows. The thought of sitting against a wall for three or six nine hours strikes me as no less uncanny, though, than the specter of looking out across the sky at a twin window-seat-mate. (If this plan develops, perhaps there could be dimmable ceiling windows, for those passengers located in the far darkness of the fuselage?)

But this mistake got me thinking.

Look at those seats in the above diagram: They are diagonally angled in relation to the center of the plane. This means that when the plane takes off, you wouldn't feel the ordinary push backward against your seat; instead, you'd feel a strange aslant pull toward the axis. I'm sure we would adjust, and over time this sideways-and-back feeling would become synonymous with flight—but still, the adjustment seems somehow significant. As one twitter follower pointed out, this also means that economic classes would be oriented around who was closer and farther from the roll axis of the plane, making poorer passengers experience more nauseating bodily tilting as the plane turns.

What about emergency exits? Are we really to believe that entire rows of six passengers are going to file through exit doors on only one side of the plane (one side for each 'wing')? This seems unlikely to pass safety approvals.

Also, consider boarding. In the above mockup, all passengers are conceivably enplaning through that single jet bridge. But then look again at the seat chart in the diagram. It seems to me that boarding this type of plane from a single jet bridge would be awkward at best, and a logistical nightmare at worst. Yet if two jet bridges per Flying V are needed, that is a signifiant infrastructural shift to ask of airports: It effectively means two discrete, coordinated boarding areas for each flight, guiding passengers down two different jet bridges to board the two 'wings' of the plane.

I realize I'm getting in the weeds here. And I'm using this metaphor intentionally: Weeds. This plane is, in so many ways, about realities on the ground, now—realities that we don't really want to face. A warming planet. Flooding coasts. Intensifying storms.

The following still image is from engineer Justus Benad's website, where the diagram above also came from:

In a video montage, a couple people (presumably one of them Benad) walk up a hill in order to demonstrate a model of the Flying V. They launch the plane, and it soars beautifully. What interests me about this presentation is the pastoral scene. The rolling field, the forested background. So much of this speculative airplane is about connecting with, or recovering, a better Earth. And my strong sense is that large-scale air travel is not the way to achieve something like equilibrium between our species and the rest of the planet, even air travel that promises 20% greater fuel efficiency. The Anthropocene requires a jolt to our current modes of movement and habitation—not just a tweak, no matter how aesthetically captivating it may appear.

Posted by Christopher Schaberg at 7:46 AM