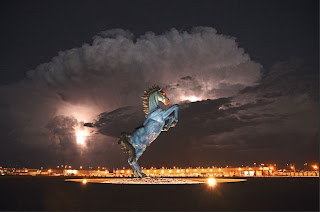 This post reflects on a Wall Street Journal article about the controversial public art installation (“Mustang,” by Louis Jiménez) located at the gateway of the Denver International Airport. I wish to elaborate briefly on a few specific passages from the article:

"It looks like it's possessed," says Denver resident Samantha Horoschak. "I have a huge fear of flying anyway, and to be greeted at the airport by a demon horse—it's not a soothing experience."

Who said that flying should be a “soothing experience”? Human beings in flight are hardly stable subjects. Perhaps the horse conjures all too uncannily the contemporary, possessive attitude toward airborne mobility—what the Greeks might have simply called hubris.

Now a local developer, Rachel Hultin, has launched a campaign to get the wild horse moved so it isn't the first thing visitors to Denver see. In the past month, Ms. Hultin has signed up about 7,600 supporters on her Facebook page, Bye Bye Blue Mustang. This week she dropped off 200 protest haiku at the mayor's office. (Sample verse: Because of this thing / People think they are in hell / Instead of Denver.)

First, what should be the first thing that visitors to Denver “see”? How are airports supposed to function as infinitely inviting gateways, when we know that their everyday operations are far more mundane—not to mention rife with intimations of mortality? Second, what do haiku have to do with A) protest, and B) Western American art? (Come to think of it, I've seen the movie, and it stars Tom Cruise.) How is it that this particular instance of airport art has provoked a completely unrelated literary genre as a form of response?

"When they unwrapped it, I was just horrified," says Dena McClung, who watched from the airport tower, where she worked as an air-traffic controller until her recent retirement. "It makes me feel like I'm looking at something out of a science-fiction movie."

Wait, let me get this straight: An air traffic controller sees a horse and thinks of “science-fiction.” Meanwhile, sleek metal tubes thunder into the sky all around...but nothing ‘science fiction’ to notice there. The animal as art-object becomes a fictive semaphore of horror; at the same time, the scientific machinations of human beings slide out of focus, and turn into natural arcs on the horizon of consciousness. On the approach to the terminal, an equine sculpture evokes cinema—airport screening is a given.

"It's disturbing," says Nancy Harris, a Denver painter. "As an artist myself, I totally respect the artist's vision. But I don't think it's representative of the Denver community."

This is a sneaky assertion, with grave implications: Art (here represented by a painter, a metonymy for the art form par excellence) is first and foremost about representation. The more true to life the “representative” force of the artwork, the less we have to pay attention to the actual re-presentation of humans (and all the politics involved therein) from place to place, consolidated in and facilitated by airports. An odd proposition: Soothing art as a supplement to airport banality.

Resigned to looking at it for at least the next few years, Ms. Hultin, the leader of the anti-Mustang campaign, now plans to launch a public-education effort to demystify the sculpture. … Her goal: Instead of being scared, "when people see it, they'll be like, 'Oh, that's interesting,'" she says.

Is ‘demystification’ a product, or a process? Demystification is never something to be achieved once and for all; rather, it is an ongoing, critical comportment of sorts. To suppose that it is ‘art’ that requires demystification is to get the arrangement entirely wrong: art exists precisely on the seam between reality and mystery. Sadly, it seems that for Ms. Hultin, being “scared” could never be “interesting.” At the intersection of the Denver airport and public art, one may glimpse the threshold of the Sublime.
Posted by Christopher Schaberg at 3:33 PM