On Crashing: An Inquiry of Fragments

Of a poem. To us poetry is ludicrous,
As if telling a hawk he has talons.

—Mark Yakich, “Last Flight out of a State of Mind”

A recent article from the Times reports that the crash of Continental Flight 3407 near Buffalo, New York was possibly caused (in part) by "specifically, large cool droplets of water that freeze on contact with an airplane." I am no scientist, but I wonder about the specificity of the terms "large" and "cool" in relation to matters that would seem to require precision (i.e., aeronautics). Now the debate seems be turning from matters of ice to matters of the autopilot: if it isn't nature, it's the robots that kill us. (But what happens when climate and machines collude?)

A similar problem can be considered in further reporting on the circumstances around US Airways Flight 1549's emergency landing in the Hudson River. It turns out that the plane went through a flock of Canada Geese:

But researchers are still trying to determine if they were migratory geese from Canada, or resident birds from the New York area. Those that migrate typically weigh from 6 pounds to nearly 11 pounds, the safety board said, but nonmigrating geese are fatter and “can exceed published records.” Either kind is too much for the engines to handle, however.

It also turns out that the engines of the Airbus A320 are required only to be able to "choke down" (is that a technical phrase?) birds of up to four pounds. Yet at stake in this investigation is not why this plane's engines seem built drastically below levels of reality (the Airbus A320 has not been grounded; there are several hundred taking off and landing as I write this), but whether the birds in question were locals or tourists, corpulent or svelte. Yet still, the masses in question are so disproportionately greater than the certification standards of 1996. Have Canada Geese really gotten that much larger in recent years? Should we blame the chubby geese on urban sprawl, or on migration patterns being affected by global warming? Or is this a postmodern Icarus myth, a cautionary tale about underestimating a flying machine's "choke down" levels? I find myself utterly flummoxed concerning the competing values of technical science and everyday mythology in such reporting.

There is an aesthetic history to trace here. Of course these thematics go at least as far back as Icarus, but for our purposes here, let us consider two 20th-century examples from U.S. literature: F. Scott Fitzgerald's The Last Tycoon (the original, non-authorized edition of 1941), and Michael Crichton's Airframe (1996).

Fitzgerald's unfinished novel begins with a late night, transcontinental flight that is grounded by thunderstorms in Tennessee; Fitzgerald had sketched out an ending that would have involved a midnight plane crash into snowy mountains, a month after which a group of children on a hike in the vicinity find the wreckage and pillage the plane's contents, thus learning about the main characters in a grizzly sort of ramshackle anthropology of the present. The narrative is framed by the tremulous status of human flight.

Crichton's novel opens with a scene eerily similar to the descriptions we are being given about Flight 3407's last moments of flight: "...the plane seemed to shudder, the nose of the plane turning down. Suddenly everything titled at a crazy angle. ... The plane went into another steep dive" (4-5). Compare a passage from the Times article today: "Then the airplane nose pitched up, then down, as the airplane rolled to one side. It was far too close to the ground already for the crew to regain control."

Incidentally, Crichton's novel refers to planes again and again as "birds." This is not at all an uncommon trope, but it is worth reflecting on given our current preoccupation with "bird strikes." The bird, in other words, is both a figurative model for human flight, and the animal that can endanger human flight. In my dissertation I call this aesthetic trend "bird citing," for the ways in which birds and planes are symbolically juxtaposed and occasionally literally collide into one another around the space of airports. Birds are sometimes cited as inspirations, and other times cited as threats.

A complexly layered instance of bird citing can be seen in a public art sculpture at Chicago's Midway Airport. Ralph Helmick's installation "Rara Avis" is a diaphanous bird comprised of 2500 tiny metal airplanes. Here is the City of Chicago's Public Art Program description of the piece:

Suspended sculpture visible from center of ticketing hall and mezzanine level...an epic suspended sculpture poetically linking natural and manmade aviation. Comprised of thousands of precisely suspended pewter elements, the artwork employs three-dimensional Pointillism wherein numerous small sculptures compose a larger, composite form. From a distance, the sculpture is perceived as a monumental image of a cardinal, Illinois’ state bird. Upon closer examination, a perceptual shift occurs and the large avian form reveals itself to be composed of over 2500 small renderings of aircraft. Over 50 different aircraft are represented, ranging from Leonardo da Vinci-inspired designs and 19th century balloons to classic passenger airliners and 21st century spacecraft.

In a flip of scales, this bird is apparently able to "choke down" thousands of flying vessels, from across historical moments, and remain a contemplative, airborne register for human flight. 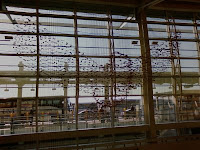 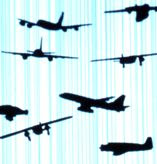 The links between "nature" and "manmade aviation" are made in the air, and undone on crashing. Or perhaps this formulation gets it all wrong: what if there were never any links to be made or undone in the first place? What if 'man' could never be closer to, or farther from, 'nature'? How might we think of flight differently, then? Might we be able to build a better vocabulary for talking about things like air flow, ice, and birds—not to mention, ourselves?
Posted by Christopher Schaberg at 10:48 AM