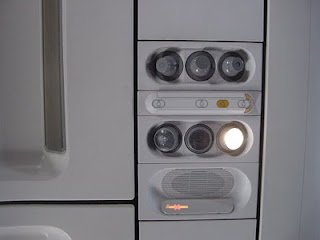 I'm currently writing an article on airport screening for an upcoming issue of the journal Media Fields. I'm going to use this post to think about some of the timely aspects of this topic—some spurs that don't exactly fall into the purview of my article, but that I've been nonetheless thinking about along the way.

Airport screening has been in the news lately, with an ad hoc resistance movement emerging out of ordinary passengers frustrated at the TSA's newly deployed full-body scanners, or Advanced Imaging Technology (AIT).

The websites We Won't Fly and Opt Out Day called for passengers to either avoid flying altogether on November 24 (the nation's busiest travel day), or to opt out of the full-body scans, submitting themselves instead to time consuming "enhanced pat downs"—and thereby snarling airport security lines. Either way, the intent was to send the message to our government that airport security has crossed the line.

But as the day unfolded, as one NY Times article reported, "most travelers seemed more interested in getting to their destinations than in making a political statement."

Indeed, the issues around airport screening would seem to be all about politics—but it is a very ambiguous and confused set of political ideals, assumptions, and priorities. Perhaps this is why no unified political statement was available to be made.

First off, there is the questionable use of the full-body scanners. Objections have been raised concerning an invasion of privacy involved in imaging the whole body. Several questions arise from this point: What if I don't want a random person to see the shape of my body? (Ans a subset of the question: What if my body does not conform to normative body images—am I then suspect?) Does this technology really make the sky a safer place? What if the TSA agents are taking sexual pleasure in seeing virtually stripped bodies? (Encouraging this last point, the We Won't Fly website calls the AIT devices "porno-scanners.")

Second, when a passenger opts out of the full-body scan and then must submit to a pat down, this arguably reflects an intrusion of government into private lives: the claim is that passengers literally feel the arm of the government feeling them up if they opt out of the full-body scans. The language gets ramped up to the point that the pat downs have been referred to as "sexual molestation." Again, there are hovering questions of whether these pat downs really make the sky safer, and whether the TSA agents enjoy their work. (The excellent Saturday Night Live skit was perhaps the most astute reflection on this conflation of issues, so far.)

Third, there is the constitutionally defensive and vaguely homophobic rhetoric expressed by the folk hero of the moment John Tyner, who after opting out of a full-body scan in the San Diego airport, then chose to opt out of the pat down, with the insistence that "no one but my wife and my doctor" are allowed to "touch my junk." This sentiment seems to house a dual core of affronted masculinity mixed with a fierce protection of private property (the body serving as the zero level of private property).

This last point brings me to what I think is the real crux of the matter: Is air travel a form of public transportation, or is air travel an extension of private life? Can it function effectively as an equilibrium of both, or are these two things incommensurate (or at least in high tension) on some base level? In other words, how much are private lives translatable into public spaces as ethereal and interpenetrating as the air? Civil aviation, which literally takes airspace as its medium and message, has come to signal a crisis point where private lives can never be adequately defended—neither in theory, nor in practice.

The most nuanced response to these various concerns might very well be reflected by a certain ambivalence: On the one hand, yes, we must admit that the latest safety procedures verge on the absurd, they strip citizens of their rights to privacy, and they arguably do nothing to make flying any safer. On the other hand, though, we should legitimately wonder if these analytic categories—absurdity, privacy, and safety—in fact have ceased to be useful measuring devices when we are dealing with something as tenuous, as globally complex, and as intimately shared as air travel. (Of course, if we were to admit this, we then would have to think seriously about land travel...and the politics of 'land' in general.)

If we were to take air travel seriously as a form of public transportation—if we acknowledged our flying selves as a kind of ungrounded body politic, and not simply as independently mobile cells—I wonder how this might shift the ways we talk about airport screening, and how it would complicate the various points of accountability and responsibility for all parties involved? In other words, what would happen if we were to take the air more seriously as an inescapably shared medium, a public space that we can never escape nor neatly privatize?
Posted by Christopher Schaberg at 2:31 PM