Why Do Dreams Need Guns? 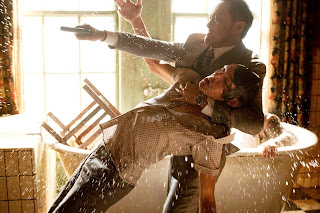 I just finished watching Christopher Nolan's most recent film, Inception. I found this movie perplexing on many levels, not the least of which was its relentlessly derivative post-Matrix feel. This included all the fights and guns, which never cease to confound me in the context of reality-bending films: if reality can be bent at will (and we see entire cities literally bent in Inception), then of what use are straight punches, combat rolls, and sharp shooters? This makes no sense, and only distracts from the ostensibly philosophical edge of the plot—or perhaps it's that the plot needs these violent charades precisely in order to mask the fact that there is no consistent philosophical project at work in the film.

The subject of dreams should make for fertile imagistic ground in a film; we've seen this in Richard Linklater's Waking Life and Michel Gondry's Science of Sleep. But what these films did well was to harness the minutiae and at times truly nonsensical residues of everyday life as a way to animate and (partially) translate or interpret the dreamworld. Inception, on the other hand, tries far too hard to pull off an aesthetically complex but still basically linear narrative of multi-layered dreams. There are dreams within dreams within dreams—and finally, the film leaves the viewer wondering if the whole movie was itself a dream. (I actually think Cameron Crowe's Vanilla Sky, a remake of the Spanish film Abre los ojos, pulled off such an indeterminate ending more convincingly.)

The problem with Inception is akin to the problem of Plato's allegory of the cave and the problem of The Matrix, where there is no anchor point for something like actual reality. In each of these cases the supposed real 'reality' (beyond the Matrix, outside the cave, really being awake) always is open to being exposed as a further layer of simulation, sleep, or otherwise mediated deception. There is an infinite regress shot through all levels of the 'real'. Waking Life played with this infinitely looping regress, but in a more truly playful way, accepting as it were the erosive quality of such speculation. Waking Life followed Nietzsche's theory that "a dream, if repeated eternally, would be felt and judged entirely as reality"—and thus everyday life is just a long dream by another name. (And this is similar to Chuang Tzu's "butterfly dream" puzzle: upon waking from a dream in which one was a butterfly, one might not be certain whether one is actually a human who has just dreamt of being a butterfly, or a butterfly who is presently dreaming of being a human.) Even a film like David Fincher's Fight Club did more justice than Inception to the question of what is at stake when the line between the real and the fictitious gets blurred by the threshold of sleep. In that movie, the nameless narrator played by Edward Norton wakes up too late, just as the real world around him is starting to fall apart.

It is clear that Inception is not a radical break from the lineage of recent dream/simulated reality films. But as the latest and most acclaimed of these films, it is worth asking: what might Inception tell us about what all these characters are looking for with such consternation? 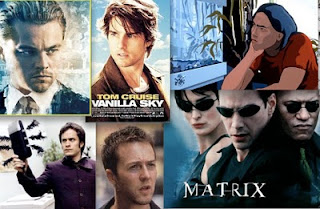 I wonder if this collective, outward looking gaze returns us to the topic of violence and guns in Inception. Perhaps the nightmare that all these characters are looking to find their way out of is a dream of military dominance. For what else can all the scenes of paramilitary sniping, blasting, and machine-gunning possibly be about? Somewhat against Freud's formulation of dream-displacement (by which things of high psychic value are de-emphasized in the dream, and low value things get exaggerated and thus serve as psychical red herrings), I think that the guns & violence of Inception (objects and actions that only become more overdetermined as the characters go further 'down' into the subconscious) in fact function as fairly obvious dream symbols in this film.

The twist, however, comes at the level of whose dream we are referring to. In my reading, the film is not about the various characters' dreams or nightmares at all. In fact the dream of Inception is a cultural dream work, a mass condensation of promises and investments concerning precision firepower and discrete time-frames for exiting certain theaters of war. In short, Inception is about a very unfulfilled and dispersed desire for pinpoint military action and tidy resolution in Afghanistan—and by extension, all the other parts of the world for which Afghanistan stands as an untidy metonymy. The symmetry is all too obvious, in this case; it's whose dream this really is that is the question—not to mention how we might wake up from it.