Aircraft disaster ecotopias and the making and killing of liberal subjects

Recently I've been working on an essay about violent airline disasters and environmental aesthetics. It seems to me that there is a persistent drive to describe the surroundings of actual or potential airline disasters in pastoral language, and through images that prepare passengers for pristine landscapes that lie outside the fuselage of crashed planes.

For instance, I continue to read about how part of the Air France plane that went down in the Atlantic two summers ago has been discovered "on a sandy plain" at the bottom of the ocean.

Another example can be seen in this snapshot of an Airbus A340 emergency briefing card that a friend shared with me after a recent flight on Thai Air: 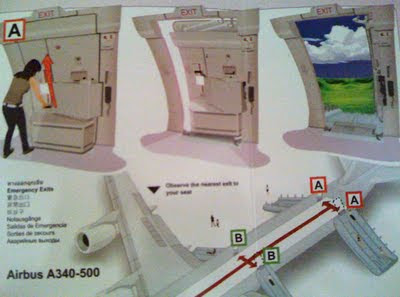 Consider the verdant utopia that exists just past the emergency slide on the far right frame. This is an ecotopia, a wish image for a tabula rasa where the post-crash human can begin again, alive and free to start afresh, to make oneself from the ground up, as it were. This nestled image of an 'outside' to air travel stands in stark contrast to the rest of the safety diagram, with all its instructions and technical details. And it serves as a ideal space where the escaped human can achieve full selfhood: it is a pre-history paradise that strangely exists at the end of history, out the EXIT door of a crashed plane.

Lately this sort of imagery has cropped up in a seemingly disjunctive context. Yesterday The New York Times provided an info-graphic that illuminated the setting and layout of "Bin Laden's Compound": 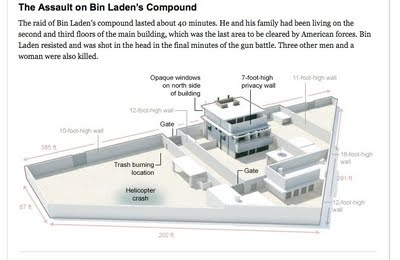 First let us pause on the shaded area where one of the stealthy U.S. Navy helicopters apparently experienced a "hard landing" and was subsequently blown up as the commando team departed the premises. The aircraft's readiness to be self-destructed suggests an autoimmune function of sorts, as if the military aircraft can always be turned back on itself; this seems obvious enough, perhaps, and yet it is a curious return and reversal of the post-9/11 realization that fully-fueled commercial airliners are missiles by another name. While we do not see the wreckage of the helicopter on the info-graphic, this visual representation of the crash nevertheless suggests, via a grayed-out negative space, the presence of air power and aerial viewing technologies. (My mentor Caren Kaplan has been posting on this topic at her excellent new blog Mind's Eye.) This naturalized perspective is then reinforced by the zoomed-out view that follows: 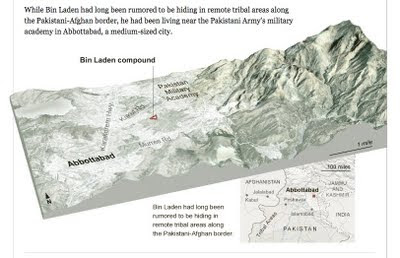 And here we are back in the ecotopia: dramatic mountains pronounced, riparian zones and watersheds suggested—while human settlements are greatly minimized and de-emphasized, a pale grid at the foot of a wild world. It is in such fantasy topographies that liberal subjects can be made, and killed. An entire political philosophy is thus maintained through simple recourse to a Rousseauian landscape, where everyone included is assumed to be worthy of self-made life—or just death.
Posted by Christopher Schaberg at 7:56 AM