While cleaning my office today (an end-of-semester ritual), I stumbled upon this photo that I took in 2001 when I worked at the airport near Bozeman, Montana: 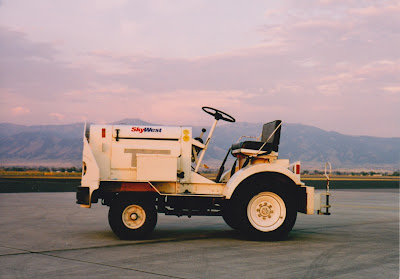 This was my work vehicle. It is the standard diesel "tug" that you see airline workers driving around the tarmac, pulling baggage carts and other miscellaneous trailers around aircraft. I like the way the tug looks against the mountains and the evening sky, almost blocking them out; this sort of captures how I've come to think about airports, as curious spaces that blot out whatever region you are in, even as they insist on regional value (the ability to differentiate place A from place B, and the need to travel between them). Looking at this picture now, on my slim MacBook Air screen, its metaphoric "AirPort" picking up the wireless DSL signal in my house, the scene seems almost quaint: the severe tarmac and a loud, powerful little machine to move heavy cargo around. But of course, at some point my newly manufactured computer was loaded onto a trailer in another country, and hauled into the belly of a plane in order to arrive where it is, aglow in front of me now.

As I finish my own book on airports, I'm also reading the book Aerotropolis by Greg Lindsay and John Kasarda (Kasarda invented the term basically to  mean elaborate city infrastructures designed explicitly around air travel). Among the numerous of reviews I have read of this book, I especially like Ian Bogost's take on it. One recurring tension point throughout this book is the simultaneous presence and intricate imbrications of virtual technologies and physical transit. On the one hand, humans have more ability than ever before to be virtually (almost) anywhere, and therefore to eliminate certain 'needs' for physical travel and all the time and resources exhausted to this end. On the other hand, the airborne movement of stuff is only increasing, and this is where the aerotropolis would seem to come in: cities are essentially to be conceived as sites for stuff rather than as places for people. You can sort of see this at work just in the catchy cover of the book, a kind of fantasy in bold colors of a manipulable landscape: 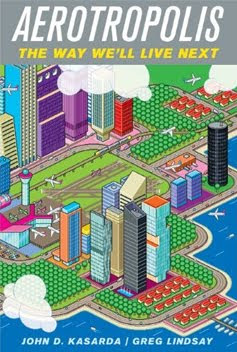 An interesting feature of this image is the lack of people. Certainly, we are to assume there are people in those buildings and within the swarm of airplanes (an air traffic controller's nightmare). But the point is that it is a different scale of seeing people and things, a zoomed out view that suggests a grander scheme than mere humans can grasp. And indeed, this is the feeling I would often get when I worked at the airport: hauling around loads of stuff bound for somewhere else, boarding and deplaning passengers who would file dutifully on and off aircraft, seeing the planes swoop in and out of the valley...there was something much bigger than me—and maybe bigger than all of us—going on here. Maybe I was feeling the tug of the aerotropolis. But to be totally honest, it felt more like the frayed end of something, like an unsustainable trajectory.

Lindsay and Kasarda are probably right when they predict how flight will become even more important and expected in the years to come. And yet, this should not preclude us from wondering about the less-than-ordered nature of this trend. Air travel will no doubt continue to morph and surge in certain parts of the world. But it could also be phased out in certain ways—and I think new media communication modes are an early indicator of this. I'm not saying that people will just suddenly stop flying, but that as 'presence' itself is gradually redefined, we will likely see a re-prioritization of 'being there'.

Lindsay and Kasarda refer to "evolution" and "Darwinian" processes of selection throughout their book, as they make their case for the historical ways that American cities rise, stumble, and fall—and how the centrality of air travel should be seen in this light. But it seems worth remembering that evolution is not simply about "survival of the fittest" (or fastest, in Kasarda's version); evolution is more accurately about adaptation, mutation, and diversity. Evolution also takes place on a timescale that is so much more vast than a century's worth of social and cultural developments can account for. If we really wanted to think about how air travel is part of our species' evolution, we would have to look at it as a value-neutral development among myriad other transformations and shifts in how we get around and impact our ecosystems.

Air travel may seem significant to us, from our perspective—but this doesn't mean that it necessarily has any 'higher value' in evolutionary terms. The odd thing about evolution, as I understand it, is that it is only traceable in retrospect. Furthermore, we really can't make predictions about the future based on evolutionary logic, because the ground is literally alive and moving under us; we're in it and of it—we are our own evolutionary blind-spot, as it were. While Lindsay and Kasarda make bold claims about the the future of flight, I'm wary of such confident teleological argumentation, particularly when it is couched in terms of social-science inflected recourse to "evolution."

Air travel involves so much disorder and diversity; so many awkward transitions and uncomfortably protracted spells of time; labor disputes and wretched working conditions; unexpected events and undesirable circumstances, Business Class Flat Beds and cramped coach seats.... To really think critically about air travel we have to account for these things, as well as economic strategies and zoomed-out views of progress. Strictly speaking, there is never a 'larger view' of flight independent of the tug and million other details clumsily converging and moving around airports.

The subtitle of Aerotropolis is "The way we'll live next." If my book The Textual Life of Airports were a companion piece or response to Lindsay and Kasarda's project, its subtitle could be "The way we* have lived." The asterisk would refer to a qualification concerning the privileged airborne few, and the many many workers who never leave the ground.
Posted by Christopher Schaberg at 4:15 PM