My grandparents lived in a Frank Lloyd Wright house in Okemos, Michigan. The house was my grandfather's pride and joy. After my grandparents died the house was sold, and I was worried that the new owners would have it bulldozed, and have the lot subdivided for three or four new homes. But instead, the new owners apparently fell in love with the quirks and character of the house, and they have done a beautiful job restoring and modernizing it (in the funny way that 'modern' can refer to a retro aesthetic). Here is the great room of the house, as it looks now: 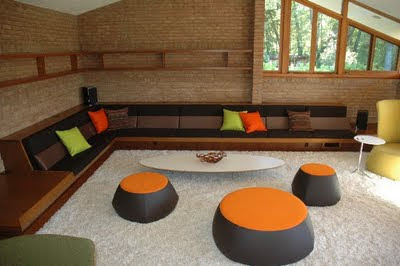 I have such vivid memories of being in this house. When my cousins and I would spend nights there we'd often sleep on the floor, but this involved a bit of technical finesse. The house had radiant heating, and so you had to have just the right configuration of davenport cushions and only a light cotton sheet over you, or else you'd wake up drenched in sweat, with that awful taste of microwaved Schwan's chicken sandwiches in your mouth. (If you could sleep through the night, the salty residue got somehow absorbed.) The radiant heating made the house always feel cozy, which was rather paradoxical given the panoramic windows that, in winter, also invited the frigid Midwestern ambiance inside. In the summer months, the house felt almost like a large tent, with the cedars and white oaks at the edge of the yard, just a short sprint away... 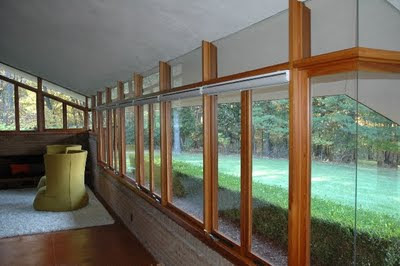 Posted by Christopher Schaberg at 10:36 AM