The other day I met the architect Ammar Eloueini at his new project site, where he gave me a tour of the J-House: 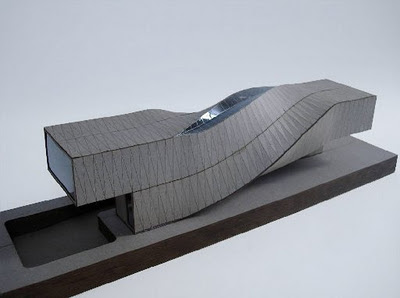 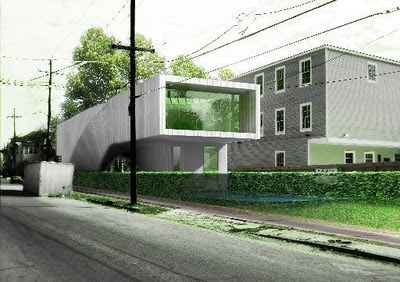 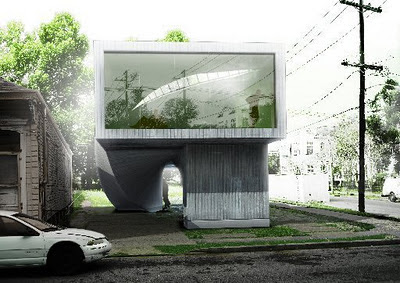 (These images are from Eloueini's AEDS site; more images of the actual construction process can be seen here.)

The building is designed to minimize the footprint (flood zone thinking) while maximizing the use of the geometry at hand. The house is situated on a traditional narrow New Orleans lot, 30-feet wide by 150-feet deep. The views from the upper floors—the main living area—are striking, with the wide windows ten feet above ground framing the surrounding neighborhoods in effortless, frayed panoramas. There is a stunning sliver of light that cuts gently into the midpoint of the roof. The design makes use of the two overhangs for a carport in the front and a shaded outside area toward the back. To me the covered spaces had the curious feel of a Zen garden that you could hang out in. It reminded me of walking around a Gehry building, but the difference was that the J-House seemed to be inviting me to pull up a chair to the curvy side and open a bottle of wine: to sit down and enjoy the structure while in very close proximity to it. (Gehry's buildings, on the other hand, seem to facilitate movement. This is not a critique at all: they do it really well, for all kinds of movements.) 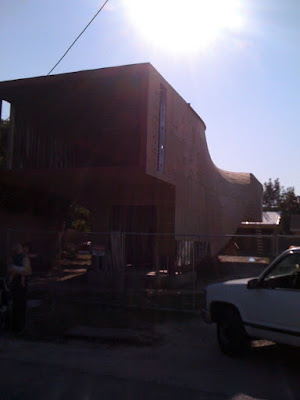 When I first walked by the J-House a month ago (the house is mid-construction), my partner Lara remarked that it felt like a huge shell you'd find on the beach: startled by its size, perhaps, but familiar with its whorls. Indeed, there is something about the structure that appears accreted, then etched away over time, literally lived in. This is interesting given the fact that the house is not yet finished. But it goes to show how much thought has gone into the space: already lived in while yet uninhabited, as it were. 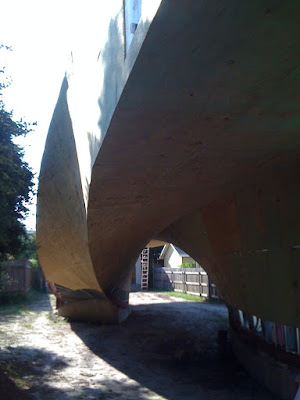 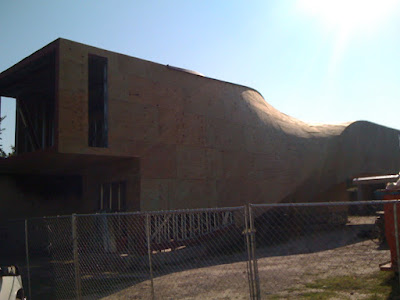 When I went back to the house a week later and stood outside it for a while, just watching the clouds move by overhead, it occurred to me that it also resembled the eroded smoothness of slot canyons in the desert southwest, those little flash-flood grooves that you can stand in and look out of, watching the clouds and sky fly by. In this way, it was vaguely reminiscent of standing within James Turrell's "Three Gems" at the de Young in San Francisco. The difference here, though, was that unlike one of Turrell's carefully curated skyspaces, the J-House was just there, intermingling with myriad other shotgun and creole cottage style homes. In New Orleans, you get these fractured views of the Gulf Coast sky walking down any street, as the staggered roof-lines intersect and morph into one another, occasionally collapsing in on the structures beneath. New Orleans shows off its erodedness. The J-House is like a re-mark of this common experience: it reminds you to take the time to see it.

Frank Lloyd Wright obviously wanted to evoke the power of erosion with Fallingwater, which suggests the very foundation of the home as ephemeral, moving, almost Heraclitean in its constant relationship to dynamism. Eloueini seems to be balancing this impulse with the always-already submerged feeling of New Orleans: we're under water, and there's no getting around it. Better to build with time and levity both on the mind, aware of radical flux and the reliable comforts of a home-space, at turns and at once.

I had planned to start this post by quoting Wallace Stevens, from his poem "An Ordinary Evening in New Haven." Now, it appears, I'm going to end with it:

These houses, these difficult objects, dilapidate
Appearances of what appearances,
Words, lines, not meanings, not communications,

Dark things without a double, after all,
Unless a second giant kills the first –
A recent imagining of reality,

Much like a new resemblance of the sun,
Down-pouring, up-springing and inevitable,
A larger poem for a larger audience,

As if the crude collops came together as one,
A mythological form, a festival sphere,
A great bosom, beard and being, alive with age.


Ammar Eloueini is building a house that is truly "a larger poem for a larger audience." His J-House sends my mind rushing with ideas for what Lara and I might do with our tiny house (the lot is 15-feet wide by 90-feet deep!) when we start to renovate it in a year or two...
Posted by Christopher Schaberg at 1:40 PM