Alec Wilkinson had a great article on "tiny houses" and the psychology of small home dwelling in The New Yorker last summer ("Let's Get Small," July 25). Wilkinson focuses primarily on a movement that builds and resides in homes built on trailer platforms: they can be moved around to different plots of land, and thus the homeowners can live "off the grid," in a sense.

Yet for all of Wilkinson's insights as to the motivations behind tiny house dwellers, he misses an important point: it is not just that tiny houses allow people to live "off the grid"—small homes also are a way to make less of an impact on the grid. In other words, it is not just a matter of living beyond or under the radar: it is also a way to live on the radar, using far fewer resources. While it's true that building codes now do not support such structures, Wilkinson's article illuminates a trend that might (wisely) be taken up more broadly, and thereby affect changes to the very codes that now make such choices seem untenable.

As I mentioned in my previous post, I really like small houses, and believe they offer so much potential for rethinking living space and human relationships to what we call 'property'. I glimpse such places occasionally around New Orleans, where incredibly narrow homes are nestled into alleys and situated on surprisingly tiny lots. Certainly there is a complex history to such dwelling spaces in New Orleans; but I think there might also be lessons for the future, particularly as we learn to modulate our consumption of resources and perhaps even decrease the human 'footprint' on this planet. Here is another small house that I see on my walk to campus each morning: 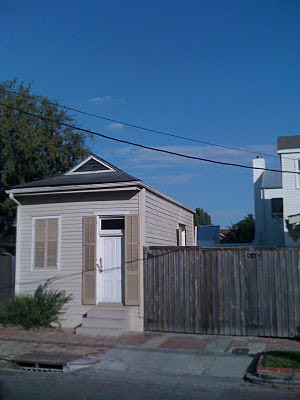 I don't know the story of this structure—likely it is an unofficial guest house or studio space at the back of a larger lot. But I like to imagine it as an actual home, replete with a scaled-down economy of practices and things...
Posted by Christopher Schaberg at 8:24 PM