Today Continuum featured my book on their Literary Studies blog, and over on his site Roy Christopher wrote an engaging distillation of "terminal philosophy," which includes a discussion of my book. 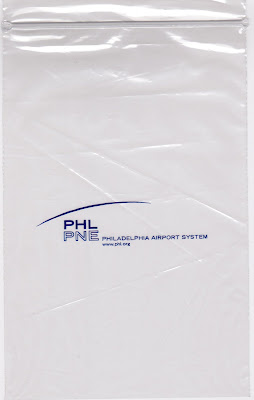 It may not look like anything special, but as is the way of so much airport culture, it is an amalgam of stories, myths, and attitudes—all bundled in a mundane object. It's a custom Ziploc baggy handed out at the Philadelphia airport (circa 2006) during the infamous 3-1-1 time period, after the liquid and gel scare.

Remember the scene? Silver trashcans overflowing with Right Guard, Secret, and Gillette sticks... So much aromatic confidence and plastic material discarded in a single TSA mandate. In 1894 Kate Chopin used the marvelous and seemingly innocuous phrase "grip-sack" toward the end of "The Story of an Hour." The airport Ziploc represents another chapter in this American narrative of travel disasters, botched communication, and the freedom that flees.

I think I am going to start posting here all the bits and scraps that didn't make it into my book The Textual Life of Airports. There's some really good stuff, all rife with subtleties & niceties...
Posted by Christopher Schaberg at 2:27 PM