It's in the air

A short essay about my airport work—cleaning out aircraft seat-back pockets at night—is in the current issue of Narrative magazine.

Meanwhile, over at Room 220 Nate Martin recently discussed the fantastic atmospheric photographs of JFK by Sophie Lvoff, from a haunting series called "For Don DeLillo." 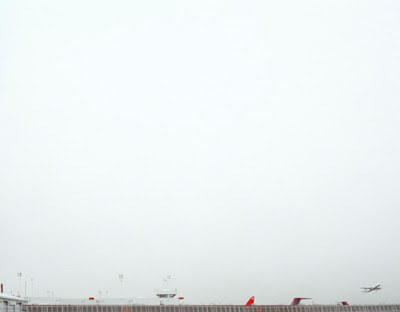 (c) Sophie Lvoff
Lvoff seems to be making a point about the heaviness of the air around airports. So much empty space, so full of meaning.

Speaking of visual things, I finally saw the film Moneyball, and was completely thrilled to see an airport scene that fuses The Textual Life of Airports with my current book project on Brad Pitt: 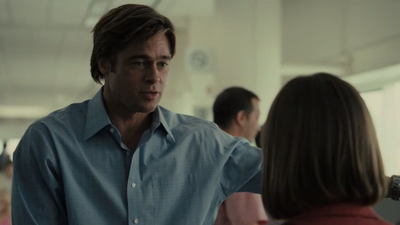 In this scene, Pitt's baseball team general manager Billy Beane is trying to reassure his daughter Casey (played brilliantly by Kerris Dorsey) that he's not in trouble. (Beane's job is definitely on the line at this point in the film.) They are in the Oakland airport, with Casey getting ready to board a plane; she's an "unaccompanied minor," so the father is allowed to accompany her to the boarding gate. Here's the dialogue:

Billy Beane: "Do I look worried?"

Billy: "...'cause you're getting on an airplane; those things crash all the time."

This is a classic example of what the journalist Dennis Lim has rightly called Brad Pitt's "wild card" quality. This is part of the mythology of Brad Pitt: his ability (often in single roles) to oscillate incredibly between cool, collected reason and erratic, emotionally charged physicality.

In Moneyball Pitt represents an adoring father, and his professional recklessness is meant to be entirely compartmentalized: Billy Beane is trying to change the game of baseball and regularly throws plastic chairs into walls at the stadium; but the bonding scenes of Pitt and Dorsey seem to suggest that he leaves his rogue attitudes at the office (except for one scene in which he makes Casey a ridiculously huge ice cream sundae—but we'll let that one slide).

Yet in the scene above, a little glimpse of Tyler Durden bursts into view. In this brief utterance, Pitt sends up commercial air travel and mocks it as a dubious project. The sterile white background of the scene—the generic concourse ambiance—underscores the sentiment here, as the exclusive privilege of flight is shown to be something rather drab and non-distinct. And Pitt's characteristic sarcasm and dark humor punctuate the scene with something else: a specter of horrible violence (the plane crash) lurking just beyond the frame, but well within the realm of possibility.

This scene in Moneyball works somewhat like the airport appearances in the Hardy Boys airport mysteries that I discuss in chapter 3 of my book: they jam together bland terminal backgrounds with looming explosions and violence. This problem also appears in a provocative sculpture by the artist Srdjan Loncar, "Abstraction I" (2003): 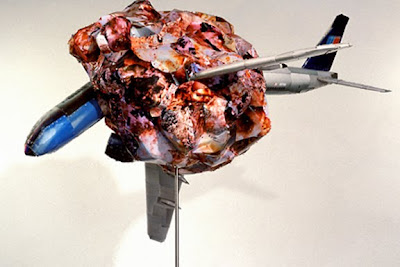 This piece is a three-dimensional collage—or in Loncar's words, a "distorted mosaic"—made from photographs of actual airplane disasters. It juxtaposes in a single object the mundane surfaces of flight and their distended flaring ends. It is interesting to note that though its completion date was 2003, the sculpture was conceived prior to 2001. And of course we must note that Moneyball takes place in 2002—Pitt's offhand reference to plane crashes cannot help but be loaded with the cultural baggage of that moment. It's in the air.
Posted by Christopher Schaberg at 10:42 AM