Let's be frank: writing has become really strange in the age of the internet.

Often enough I find that I can't write unless I have a high speed connection and the ability to toggle between several screens and sources—integrating, juxtaposing, and linking as I go. No longer do I sit only with a pile of books and underlined passages. (Okay, maybe sometimes.) Certainly, I still have to track down a lead at the library now and then; but I have to admit that these times are becoming fewer and farther between. I'm a little ashamed to admit this; but it seems disingenuous to pretend otherwise. Usually I can find what I need with Amazon's "Look Inside!" feature; yet what I perversely like about this technology is that it still does not allow for copy and pasting. Instead, you have to do a screen grab of a page selection, and then still transcribe. I think that's an important hassle, and one to retain.

I used to plan for the rare times of no connection to focus on a single Word document alone, and to write some serious prose. For me this was often the time of flying, though that time as bracketed from internet connectivity is becoming an extinct phenomenon. Increasingly, we demand in-flight Wi-Fi—or we're told to "expect" it, anyway, as in this Delta ad: 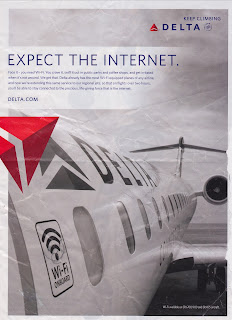 I used to like to read on airplanes, too, but the proliferation of flashing screens on seat-backs (or the monochromotone of "30 Rock" on flip-down screens above) has made reading in-flight near impossible, at least for me.

This past week while revisiting (I wasn't flying anywhere) David Foster Wallace's essay "A Supposedly Fun Thing I'll Never Do Again," I was struck by his account of (allegedly) writing in Mead notebooks, on cocktail napkins, and in otherwise pen-driven ways. Of course this was the mid-90s, but it still shocked me with a mixture of nostalgia and revulsion. On the one hand, it's so precious: the writer taking notes in real-time, to be made formal much later. On the other hand, I don't know if I could write like that any more. I remember buying journals and notebooks and filling them up with observations, citations, witticisms, and other scribbles; but these days when I buy a new journal, it usually becomes a dormant object on my desk—pure potentiality, absent of inscriptions.

Over the past eight months I've become a Twitter convert. I went into my experiment with Twitter very suspicious, and even somewhat cynical about its seeming tendency for slapdash commentary, glib pronouncements, and an often sneering tone. (But then, has writing ever been immune to these things?) My savvy colleague Tim Welsh was helpful early on by giving me a succinct insight: it's just a tool. So I went into Twitter with a mindset of practicality and utility. The reason I was starting a twitter feed was to publicize the site that Mark Yakich and I launched around that time, Airplane Reading. And Twitter has definitely been a very effective way to direct people to the site and meet some terrific writers, travelers, and thinkers.

But the expressive power of Twitter quickly outstretched the purely functional aspect of promoting our site. Indeed, if Twitter is a tool, it's like a Leatherman multi-tool. And I don't mean the cheap knock-off kind; I mean the real thing—well made, versatile, and sturdy.

As I look back over my 893 tweets (as of this morning), I see an array of ideas, images, links, exchanges, and re-tweeted quips—all of which that call out for further unpacking.

My Twitter feed has become a place of real writing, research, and thinking for me. I'll often wake up in the night with a tweet forming in my head. Sure, some of these are just playful and attempts at being clever. But many are serious questions. And as they accumulate, I'd like to think there is a logic or at least an interesting accretion that starts to form. I'm not trying to suggest that Twitter is a 'finished product' (but of course it is in its own right). As far as traditional writing goes, Twitter is more like a collective, collaborative version of David Foster Wallace's smudgy and highlighter-blotted cocktail napkins that bear the messy traces of a finished product to come.

When Tim Morton noticed how the hashtag #OOO actually performs or even is object-oriented ontology, it got me thinking more about how Twitter contains surprising archives and spontaneous constellations. In my next book, which will be a sequel to The Textual Life of Airports, I'm going to do something with Twitter and airports, as one of many examples of how new media forms and air travel coincide in curious ways—and often with weird results. I have this hunch that human flight and digital technologies are approaching an uncanny convergence, and maybe even a crisis point. I guess I do expect the internet, at least for the time being.
Posted by Christopher Schaberg at 6:51 AM