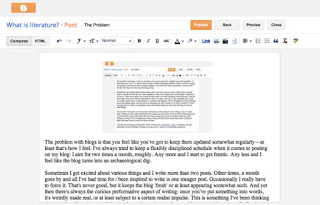 The problem with blogs is that you feel like you've got to keep them updated somewhat regularly—at least that's how I feel. I've always tried to keep a flexibly disciplined schedule when it comes to posting on my blog: I aim for two times a month, roughly. Any more and I start to get frantic. Any less and I feel like the blog turns into an archaeological dig.

Sometimes I get excited about various things and I write more than two posts. Other times, a month goes by and all I've had time for / been inspired to write is one meager post. Occasionally I really have to force it. That's never good, but it keeps the blog 'fresh' or at least appearing somewhat such.

And yet then there's always the curious performative aspect of writing: once you've put something into words, it's weirdly made real, or at least subject to a certain realist impulse. This is something I've been thinking about and reading about, and that has been distracting me from writing on my blog. Actually I've been tweeting about it a little, in very roundabout ways, thus further taking me away from the blog (as well as away from other things).

The last few weeks have involved some combination of the reasons for not writing a post. I've been busy working on other stuff, and therefore my creative energy has been drawn away from bi-weekly blog posts. I could describe some of the things that have been occupying my time (a couple of them are really thrilling, and a few others involve the sort of tedium that will crush the strongest of souls), but then I'd be using time writing a blog post about those things rather than working on them, and there's lots of work to be done on them, both the thrilling kind and the soul-crushing kind.

I should probably stop this blog post short here, before it forms into a full-blown vortex of solipsism and self-referential tunneling. Writing in our age of new media can be a bewildering experience.
Posted by Christopher Schaberg at 11:47 AM