It was about a year ago that I posted my first morning walk photo essay; I figured today that it was time to post a second one.  (I find myself telling students that things become so much more interesting when you do them multiple times—like reading, writing, etc.)  So here we go. 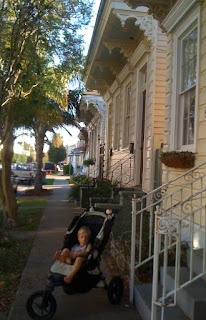 Loading up the stroller outside our house, I take a moment to capture the houses on our block.  I never tire of the block-by-block topography of New Orleans shotguns houses.  The colors and the decorative details, the rickety windows and crumpling stoops, the ferns punching out of the old brick piers, the geckos incognito or skittering across the sideboards...okay, my passenger Julien is eager to get going.

On our way, a few doors down the block we get to the house that has been raised entirely and beneath which a first floor is being constructed: 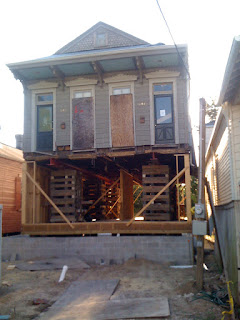 With property values increasing steadily in Uptown, I guess it makes sense to double the square-footage of the home while minimizing the construction and materials involved.  We were gone this summer when they lifted the house, but I wish I could have observed the effort that went into it.

Next we encounter a very pregnant mama cat who lounges and watches us with big yellow eyes.  I want one of the kittens. 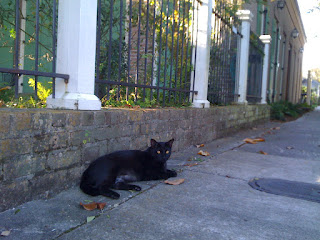 On every block we see tremendous piles of debris leftover from the hurricane. 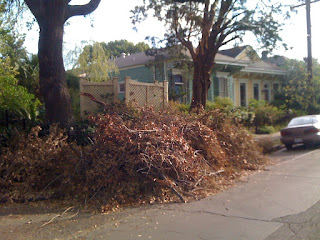 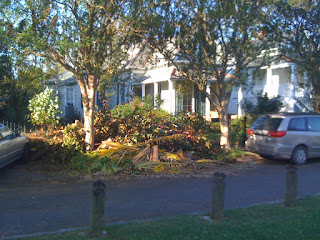 The sheer density and diversity of these piles is hard to capture with the iPhone camera: masses of organic matter the most obvious, but also telephone lines, plastic baggies that say THANK YOU with dog shit inside, putrid rodent carcasses, soggy mattresses, towels, and rugs, bird feathers....  Here's another pile a bit farther along the walk; look how the huge black garbage bags are dwarfed by the palm fronds and the banana tree stalks: 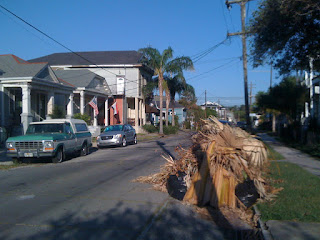 And one more for good measure: 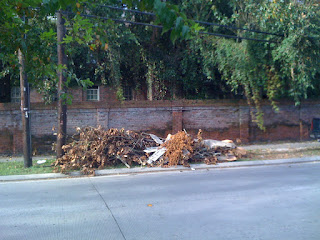 By the way, this isn't just a banal account of my morning walk (but it is that, too).  In the "Literature & Environment" course I'm planning, I'm going to have my students compose walking photo essays, and so I'm actually thinking about the parameters and possibilities for such an assignment as I write this.  I want to teach my students how, in the spirit of Tim Morton's book The Ecological Thought, environment is "stunningly vast and disturbingly decentered."  Maybe this walk seems pretty small-scale and centered, but I think the point is to ratchet up the perception and awareness to the point where the seemingly ordinary becomes overbrimming with uncanniness, expansiveness, and ontological richness.

Take, for instance, the telephone pole that we walked under a few blocks later. This thing was making sounds that resembled a barely legible song or an alien language that compelled us to pause beneath it and listen as it chattered and bleeped, as if announcing its presence. 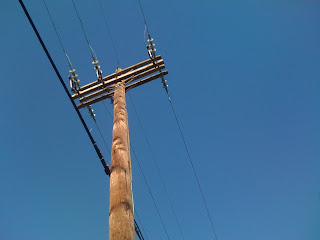 Onward then, toward the river.  Things always get weird when we get close to the river.  An omen of this is an espresso machine that somebody jettisoned onto the curb.  I almost want to take it, but I don't.  There's something daunting about it. 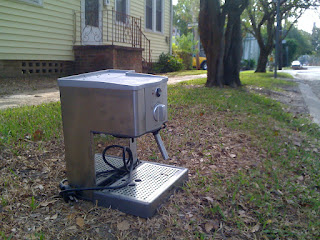 When we get to the river we hear a whir of machinery and the scrapes and clunks of forklifts moving pallets of stuff around.  There's a new food packing (I think?) facility that has twenty-some loading docks for semi trucks, as well as its own feeder railroad track where they are loading a line of refrigerated boxcars.  Two of the cars have faces painted on them, a motif that fascinates me—animated and leering cargo. 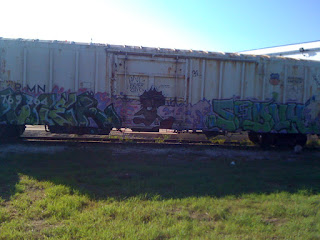 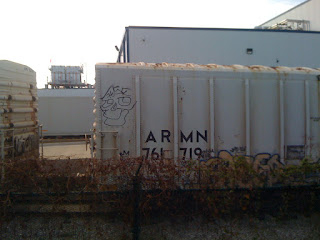 Now at the river, as we amble along the boardwalk I spot something in the water: a fin, and a tail—an enormous fish cruising right at the surface of the water.  It must be four feet long, at least.  I can't get close too it, so I try to zoom-in with my camera, but it gets pixelated.  Still, you can see it out just above and to the right of the center of the frame, leaving a slight disturbance in the current behind it: 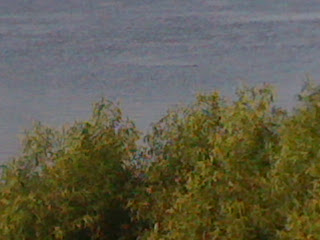 This thing is huge, and I watch it for a while.  I'm tempted to trudge down the riprap and wade into the water to get closer to it, maybe even grab it—but Julien is getting restless, ready to get out of the stroller and do his own adventuring.

So we move along, and soon we find another feline surprise: two of the wild cats that live in the riprap. There are dozens of these scrawny but beautifully shaped cats living in the ecotone between the river and the park.  They slink among the willows and the Chinese tallow trees, and usually dart off before you can get a good look at them.  But one of them, a young small black one, turned and looked at us, and I managed to snap a picture of it before it bolted into the vines and out of sight. 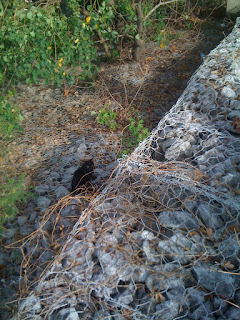 We turn away from the river and head back toward Magazine Street, pausing when we get to the big live oaks in front of Audubon zoo, where Julien likes to play.  After a summer in northern Michigan foraging and playing the woods and meadows, Julien now looks for the pockets of wild vegetation around the urban landscape—and once he finds a good spot, he'll spend thirty minutes or so collecting, breaking, making, and jabbering to the branches, acorns, moss, and leaves. 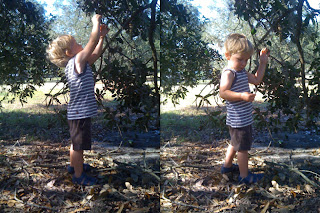 Then we head home.

And there you have it.  A 90-minute walk, documented by fifteen photos and brief commentary (just under 1000 words).  This is a working template for an assignment in contemporary literature & environment.  I'm assembling a funky and unexpected reading list for this course (mixed in with some classics), and I'm excited to see what my students make of it.
Posted by Christopher Schaberg at 3:23 PM