Getting Back to Things 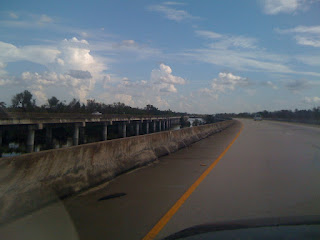 We made it home after a long drive back, full of anticipation and uncertainty, wondering how our home had weathered the storm and hoping everything was (at least mostly) all right.  The last hour of the drive was stunningly beautiful, cruising over the bloated wetlands as the clouds built and tumbled in the distance.  Beautiful, of course, with a post-sublime sort of caveat.

A couple weeks ago I wrote about how the smells of New Orleans seep up from the ground.  I've experienced this in a whole new way on returning, after hurricane Isaac slowly organized, sat and spun for a while over the city, and finally blew through.

The garbage around town wasn't picked up for days, in some cases a week, and to walk the blocks now is to rather swim through pungent scent clouds of slimy plastic wrappers; collapsed cardboard boxes; dead rats and mice that crawled into the garbage cans and could not get back out; stale beer, orange juice, milk; rotting paper diapers; decaying chicken and ham bones and ribs and shrimp heads; moldy bread; waterlogged plywood; dead leaves...to name a mere few of the recognizable objects festering on the street post-hurricane.

Driving back into town I was struck by the bent road signs, ripped up billboards, and piles of debris in the neutral ground.  The lights at intersections were either blinking red and yellow, or altogether dark—cars chaotically stopping and going, traffic somehow moving along.  People ambled down the streets in what looked like a semi-daze.  Utility trucks could be seen in every direction, cherry pickers raised and men with fire-proof gauntlets hard at work, in the balmy afternoon temperature of 95 degrees.

Our small house made it through okay, no major damage on the outside.  An old crape myrtle tree in front of our home was snapped off at the base of its trunk, and is now lying in the street right where our car would have been parked had we stayed.  And part of our front room ceiling is ballooning with old rainwater, cracking in some places. 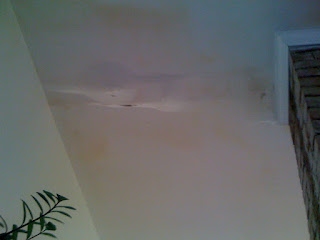 I had left a plastic bucket beneath this spot before we left town (it dripped a little during the last tropical storm a couple years ago), and I'm glad I did: there were about four gallons of yellowish water in it when we got back.  The house has a peculiar smell now, wafting down from the cracks in the ceiling; I need to crawl up to that point in our attic to check it out, but I'm procrastinating—it's not going to be pretty.  I know we'll probably have to have significant work done on that part of the roof, termites are attracted to it, etc.—but we want to put a metal roof on the whole house, which is going to be a major endeavor, so I'm delaying for now.

And anyway I'm busy getting back to things, trying to reclaim something like everyday life.

The semester began, just a week late and with everyone slightly frazzled.  My class this semester seems full of bright and excited students.  This will be the fourth time I've taught the class called "Texts & Theory" at Loyola, and I like it more each time I teach it.  It's basically an introduction to literary criticism, but it's also a class that expands and explodes what we mean by text, and shows how theory sometimes weirdly means practice.  I tell my students that our goal is to get really confused by texts and theory—and then to articulate and explain this confusion as clearly as possible.  I've never really taught the class the same way twice; I design it with enough wiggle room that it allows us to toggle between literature, culture, and philosophy—as well as linger on surprise topics and go down unexpected paths.

This year we started with some Lydia Davis and the first two pages of Jennifer Egan's A Visit from the Goon Squad, all by way of easing into discussions of what the heck 'literary theory' might be.  We're going to work our way toward Ian Bogost's Alien Phenomenology, or What It's Like to Be a Thing which we'll finish the class with, corresponding with a visit from Ian.  I'm conjuring an unusual final project for this course; it's going to involve something that the students 'make', or some kind of 'paper' that might not look paperish at all on first glance.  We'll see.

In other mundane news, I was very happy to see my essay "Flying Objects, Sitting Still, Killing Time" published in the journal Transformations; it's about the shared sensations of airport seating and airplane seats.  I started working on this topic back at Davis in 2006, presented it at ACLA a couple years ago, and it took on several different forms before finding a place in this issue dedicated to "hyperaesthetic culture."  I'm grateful for the astute suggestions from the blind reviewers who read my essay—they helped it become a piece I'm really proud of, an essay that draws from my airport book while also moving in new directions.  This photograph taken by my old friend Ryan Williams sort of sums up the topic of the essay: 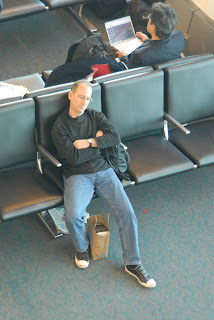 Another offshoot of my continued interest in air travel, I thoroughly enjoyed reading and reviewing Peter Adey's excellent Aerial Life: Spaces, Mobilities, Affects—a book which will bend your mind and reorient your sense of the history of flight. My review will appear in the inaugural issue of the journal Interstitial, whose advisory board I'm honored to be on.

My current book project Deconstructing Brad Pitt is gradually coming together; I've got a range of fascinating chapters from an eclectic array of scholars, and I plan to work my way through each piece over the course of this fall.  At some point in the near future I'll post the working table of contents.  I'm eager to meet with my editor at Continuum and talk about the cover design of the book.  (The cover on the righthand side of this blog is just a stand-in that I whipped up.)

I also started another book this summer, which I'm tentatively calling Notes from the Sleeping Bear.  It's going to be a book about ecological thinking, written from (and largely about) the area where I spend every summer, the Leelanau peninsula of Michigan.  I'm conceiving of it as a 21st-century Walden, of sorts.  I realize that sounds grandiose, but Thoreau's book is grandiose—and yet so aware of its grandiosity, at the same time.

That's my fall update.  I've got a couple other projects in the works, and some new courses I'm planning—but I'll stop rambling on, for now.  There's still some cleaning up to do around here.
Posted by Christopher Schaberg at 5:36 PM