Last night at this time I was building a model of our home out of Legos, showing my two-year-old roommate Julien how we had prepared for the storm: how we had boarded up the vulnerable back window, and how the wind would slam into the house and whip around the next-door palm tree when the hurricane hit. We played out various scenarios, and Julien would grunt his affirmative "Hm!" with each demonstration. 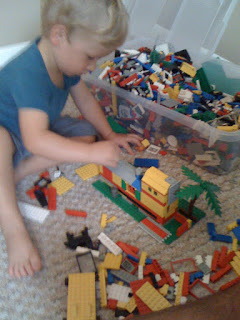 Overnight the winds picked up, rattling our old windows, and the air started to change.  At three in the morning I got up and packed the car; at 4:00 we drove off, Julien still slumbering in the back seat.  We didn't necessarily know anything more about the storm at that point—it was still "trying to become better organized"—but it was time for us to go.

The roads were empty as we drove out of the city on US-10.  As we merged onto the highway we saw the first droplets rain on the windshield.

You could practically feel the heavy penumbra of sherbet spreading over the city—and what a strange feeling to be speeding way from it, sitting in a reclined chair in a somewhat aerodynamic 2700-lb metal box on wheels. During those predawn hours I kept looking back in the rearview mirror at the glowing cloud mass.  How big was it?  Was it building?  How bad would it get?  What about our house?  Had we made the right choice?  Should we be there with our friends who had stayed?  All these questions and more were at turns enhanced and subsumed by the necessary myopia that is driving.

Later in the morning as we zoomed up I-55 we saw shattered turtle shells from ruined would-be highway crossers, and shredded armadillos balled up on the side of the road.  And of course, there were the ubiquitous black forms of ejected truck tire husks, sometimes dangerously curling up in and between the lanes.  There's something singularly terrifying about watching a big-rig shed a tire in real time, everyone speeding along merrily at 80 miles per hour while a certain tire that only you can see starts to buckle, flap on its wheel, and begin to disintegrate, leaving its carnage to flip and tumble behind, for other cars to veer around or run over.

Then there were billboards advertising hamburger choices, and others lambasting the choice to have an abortion—and still more billboards selling billboard space, a veritable landscape of meta-advertising. 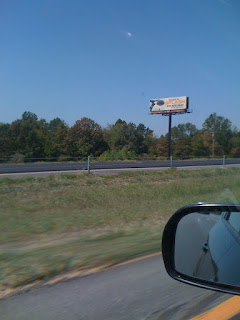 We'll spend a few days in St. Louis, where Julien is getting some unexpected quality time with his grandparents.  It's good to see him running around the yard and making up games in this new place.

But I miss our home. In my mind I keep trying to inhabit it—to check a certain leak in the ceiling, to mop up the drips around the fireplace, or to stand over that one crack in the floorboards where the wind always whistles in underfoot. I find myself imagining what the house is feeling as the storm moves through.  The house is old, and this is one of many many storms it has been through—it probably has its own patterns and flexions for dealing with such torrents of wind and rain.  The power appears to be off in our neighborhood now, and I imagine the whine of generators interspersed with the gusts and the downpour.

On our way north on I-55, we passed several dozen energy company bucket trucks that were headed south, driving in teams, toward the Gulf Coast. Help on its way.

We'll be back in New Orleans soon, back in our home.


Posted by Christopher Schaberg at 8:32 PM