Back in New Orleans

After eight weeks in the woods of northern Michigan, I'm back in New Orleans.  I love this city.  The way smells seep up from the ground.  How, when the rain pools in the streets, I'm suddenly uncertain as to whether they are mere puddles, or if the entire city is in fact made up of millions of tiny floating islands always ready to be submerged.  And how the clouds tower and move, a perpetually shifting panorama that never fails to send my mind reeling.

When our plane touched down at Louis Armstrong International airport, I was elated to see the great suspended masses of force and liquid somersaulting above the concrete stacks of the terminal. 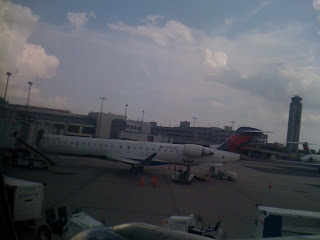 The view out the aircraft window as we nestled into our gate put me in the mindset of Walker Percy, who describes the Louisiana skyscape so well in his wonderfully bizarre novel The Moviegoer:


"It is a day for clouds. The clouds come sailing by, swelled out like clippers. The creamy vapor boils up into great thundering ranges and steep valleys of cloud."

And then there was our 100-something-year-old house, which had been sitting empty while we were gone.  There is a distinct feel of a home that has been left to breathe on its own, with no human inhabitants, but only assorted cockroaches and occasional mice foraging for hidden crumbs, their tiny turds barely discernible here and there.  A small cockroach crawled out of the sink drain this morning, appearing startled that we'd usurped its territory.  I scooped it up in an olive jar and dropped it outside, where it skittered under the house.  Even as I write this post in the predawn hours, I can hear a sizable periplaneta americana cruising through the dark across the kitchen, its broad wings making a sound not unlike a small helicopter as it transports itself from one crevice to another.

Re-inhabiting our home and re-calibrating the lines of coexistence therein, I've also had to re-familiarize myself with the old heartpine floorboards, which ones creak and which ones don't.  (Especially crucial knowledge during nap-time.)  A house several doors down from ours is being added on to; they've lifted the entire four-bay shotgun structure and are building a new first story beneath.  It's fascinating to see the underside of the house, raised as it is about fifteen feet above ground.  When we first moved into our home, I put on my work pants and a long-sleeved canvas shirt, grabbed a flashlight, and crawled beneath the house for an hour, filling five huge black trash bags with miscellaneous debris and rubble.  These were different kinds of globular accumulations than the romantic clouds above, but likewise full of history and mystery.  While looking skyward can seem like a more reliable place to look for beauty, this was a reminder not to dismiss the rich ecology of what's down and dirty.

This fall I've decided to incorporate Ian Bogost's new book Alien Phenomenology, or What It's Like to Be a Thing into my class, as I think it opens up exciting possibilities for reading and writing in my discipline (and of course for all sorts of creative practices beyond the squishy bounds of English).  I'm eager to see what my students make of Bogost's book after we've worked through earlier movements in literary theory and textual analysis.

I particularly love how Alien Phenomenology ends with a quasi-manifesto on behalf of wonder, and I hope to put this sentiment into practice with my students in their reading, writing, and thinking, as well as in their daily lives around New Orleans.  It might start as simply as watching clouds, and then learning that clouds, in the discourse of meteorology, have genus and species types and further varieties beneath that—they are living things, able to transmogrify and even dissipate at once.  And this kind of awareness is precisely what Percy is up to in The Moviegoer when he notices the atmosphere:


"The cloud is turning blue and pressing down upon us. Now the street seems closeted; the bricks of the buildings glow with a yellow stored up light."

How do clouds interact with people and cities?  How do things seem?  How can open space be not disclosed?  How can built structures stash ephemeral qualities, only to become illuminated unexpectedly?  These questions and more lurk in Percy's lines, and they lurk everywhere—waiting to be asked, speculated about, and multiplied.

Posted by Christopher Schaberg at 5:18 AM