Airport reading, airplane reading. What's the difference? These two phrases often are conflated or used interchangeably. I use these phrases in fairly distinct ways, which I want to delineate briefly here.

Airport reading can mean just the trashy stuff that you buy in the airport and maybe read while waiting for a flight. Magazines, thrillers, newspapers—it's trashy either for its content, or for where it ends up when you board the aircraft or deplane. Airport reading can become airplane reading, or be relegated to the dustbin of the departure gate.

But airport reading is more than this: it's also the profusion of message, screens, information signs, and wrapped marketing that requires air travelers to navigate and negotiate space, time, and consumption while in the airport. You have to read your way to the gate (likely buying something along the way).

The way I use this phrase, it's also airports in texts, or how airports read as particular types of narrative settings (whether in literature, films, advertising spots, or TV shows), where predictable and recognizable things can happen to characters. Airport reading is one of the key topics of my book The Textual Life of Airports. In that book I also use airport reading to stand for a kind of method—a way to be aware of (and interpret) what goes on inside and around airports. It's a sort of heuristic device that allows certain types of scenes, sensations, views, and events to mean more than simply another day at the airport. These include:
These are just a few of the things that can prompt analysis or reflection, and that I consider airport reading. You can see some of the meanings of airport reading at work in a still from David Fincher's 1999 film Fight Club:

This is the scene where we get the first sustained view of the elusive and illusive Tyler Durden, played by Brad Pitt (the subject of my next book project). The nameless main character, played by Edward Norton, is in the midst of a voice-over montage detailing the tedium of ordinary business air travel, and this particular shot shows him zoning out while being moved along a moving walkway, conceivably on the way to his gate. Pitt's character passes in the opposite direction, on the background, oblivious yet oddly relaxed and flamboyantly present.

This scene evinces airport reading by relying on a host of familiar oppressive architectural motifs and directional forces. The airport is rendered as a gloomy place, with its low ceiling and people who appear automated and totally cut off from one another—even though, in the parlance, they are in fact in the process of "connecting." The normal operations of the airport showcase automation, disconnection, and malaise. As we watch this scene unfold, we read the airport as a heavy place, in which the characters themselves read their fortunes in the dreary patterns of predictable affects and repetitive acts. The voice-over concludes with Edward Norton intoning glumly, "This is your life, and it's ending one minute at a time." Dead time, indeed.

While airport reading can overlap with airplane reading, the latter phrase also comes to mean a different set of things—and we actually can use a later scene from Fight Club to unpack some of these meanings.

This is the scene where our main character actually meets Tyler Durden for the first time. They are seatmates on a routine commercial flight. Brad Pitt mutters the safety instructions in a barely audible voice, and chuckles at the cartoonish briefing card diagrams of emergency evacuations and crash bracing positions. We follow the two characters' awkward introduction, their exchange of innuendos and jokes, and flippant storytelling. This is airplane reading: it all starts with someone reading while sitting in an aircraft. It then turns into casual conversation about flying a lot, and the stirrings of intimacy—or at least its potential. How people interact on the plane, then, can also a be part of airplane reading. (Think of the storytelling that can spontaneously take place between seatmates.)

Mark Yakich and I called our site for nonfiction about flight Airplane Reading because we wanted it to be able to reflect the range of stories, interactions, meditations, and epiphanies that can happen while sitting in or around airplanes. Then there is the feeling of actually reading while in-flight, which can produce an odd sort of alertness: attention can be at its most acute, or at its most distractable—and it is often hard to gauge what state you'll be in when you actually sit in your seat and try to read. Beyond seatmate scenarios and absorbed reading during in-flight transit, there's also a geographic register: views out the airplane window that can be exhilarating, sublime, and humbling. This is the valence of airplane reading that Marit MacArthur considers in terms of "the poetics of passenger flight" in her recent PMLA article on air travel and perceptions of the global.

Airplane reading can also connote feelings of enjoyment, desire, or expressive pleasure while seated in an airliner—or even just thinking about it. Our site has become an archive of hundreds of stories trips, flights, connections, delays, near accidents, deaths—and most of them are memories, people thinking back on flights they took earlier in their lives, and recounting these stories. I keep hoping that someone will 'live blog' or 'live tweet' a trip and then submit a transcript of it to our site. The closest thing to this has been Randy Malamud's wonderful account of his attendance at the simulation run for the opening of the new Maynard H. Jackson Jr. International Terminal in Atlanta.

Twitter is a dynamic forum for airplane reading. Alec Baldwin's infamous flaming of American Airlines on twitter created a multiplex venue for airplane reading, from the live site of the aircraft to the thousands and millions of followers who read about and responded to the situation from afar, on different planes, terminals, and screens. 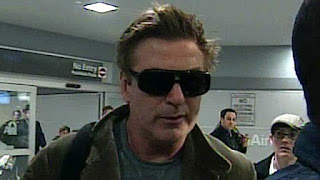 For twitter's ability to trigger, accommodate, and route all sorts of flights of fancy; for tracking people's trips, aviation stories and tidbits, and the daily grind of air travel; for the weird ways that these two technologies coexist and collide—these are a few of the reasons why my own twitter handle is @airplanereading.


Posted by Christopher Schaberg at 10:45 AM