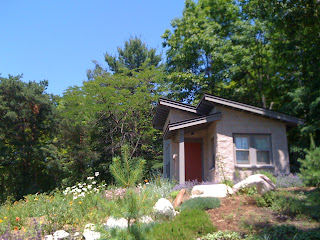 I'm up in Michigan again this summer, where I go to write and plan my courses for the coming school year. I grew up here, traipsing around the Sleeping Bear Dunes National Lakeshore. It's a beautiful place, with sand dunes and white pines, foxes and petoskey stones, northern pike and sandhill cranes. During the summer I live with my crew in this small cabin in the hills, a short walk down to the lake or a quick hike back into the deepest woods.

Writing in Michigan is really difficult—maybe it's something about the glacial moraines, or the shifty weather patterns. As if to punctuate this difficulty, a glob of bird shit just splatted down onto my computer screen as I wrote that last sentence. For a split second I thought it was a cool flash animation of some sort, a surprise from the Internet. But no, it was just a surprise from a creature on a limb of the giant white ash providing my shade. So much for working outside; I have reinvented "nature writing."

It probably doesn't help that my subject of interest—airports—would seem to be at a bit of a remove from my writing location. At most, I hear the faint roars of wide-body airliners at cruising altitude far above, outbound from Chicago O'Hare...or else I hear old Cessnas chugging away a few hundred feet up, over the shoreline. There is an airfield nearby, but, well—suffice it to say that it is not a dynamic zone of airborne transit. 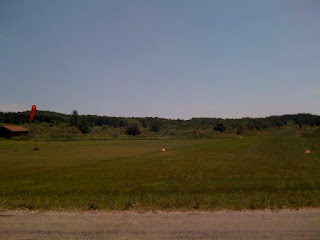 But when the writing goes well, it goes really well. Often in the earliest predawn hours, when I can hear the waves pounding the beach or the weird winds buffeting the branches of northern red oaks, I can write voraciously. I can assimilate and synthesize months of haphazard research into sentences and paragraphs. I can cull memories that I didn't know had stuck. I guess it's something like the inverse of Hemingway's method: he needed to be in France and Spain to write about being up in Michigan.

So now here I am, writing about drones while intermittently tweeting with a passenger in Atlanta and a true Delta aficionado—and together we have collaboratively reasserted the efficacy of community in an age of new media (or the age of airports, which amounts to the same thing, so far). So the culture of flight is all around me, even as I listen to a vireo summon the sunset, and the last CRJ of the day from Minneapolis adjusts its flaps overhead while on final approach to the Traverse City airport. These are concourses for unexpected connections.
Posted by Christopher Schaberg at 6:26 PM