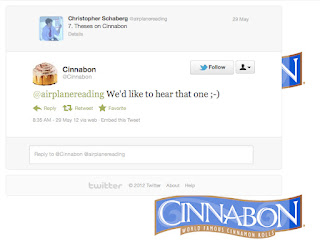 The other day Tim Welsh and I were chatting about Twitter, and he raised two points that I want to take up further in this post.

First we talked about the public aspect of Twitter, and how this can make it more than just an e-note-taking service. I like the fact that when I am on Twitter it only takes one or two clicks for me to be introduced to someone or something totally new and unexpected. Certainly this is no rare feat as far as internet roving goes—if you have ever lost an hour bouncing from Wikipedia entry to internally linked Wikipedia entry, you will know this feeling well. And as Ian Bogost points out in Alien Phenomenology: Or What It's Like to Be a Thing, "as anyone who has ever used that website [Wikipedia] can attest, its value comes less from its ability to achieve Diderotian universal knowledge and more from its willingness to allow anything inside, no matter its apparent validity, relevance, or even truth value." It's a similar capaciousness with(in) Twitter that I find intriguing.

For instance, lately I've been following the #airport hashtag, and I never know what I'll find there—what tarmac picture someone has snapped, or what emotion or idea has been associated with airports in passing.  It's been an archival coup. This could be scorned as an all too easy way of bucking traditional scholarly research, and yet it nevertheless generates what Kathleen Stewart might call an "inventory of affects" around the subject of flight: Twitter publishes the many disparate and surprising objects that swirl and circulate around the seemingly straightforward word "airport." For my interests in the culture of flight, this is fascinating and entirely worth thinking and writing about. It's not that airports are unique in any important way on Twitter—it's what they gather and how they gather things together that matters.

This spontaneous aspect of Twitter also allows it to act weirdly like any other public, where lots of things are taking place and you can never quite be sure what is going on or about to happen, or whether you're a part of some elaborate choreography or just outside of it, looking in on something that's a lot smarter than you or your plans.

So when I recently made a silly airport/philosophy mash-up joke about Cinnabon, who knew that the company itself would reply to my quip? Or that Ian Bogost would retweet my joke to his 11,000-plus followers, giving me a handful of new followers along the way? Or that, a week later, the pastiche twitter feed @Bogost_ebooks would redeploy my "Theses on Cinnabon" (in Bogost's words qua retweet) as a rejoinder to another person's sarcastic jab at glib Marxist jokes? Or, furthermore, as one unconfirmed rumor has it, that @Bogost_ebooks is in fact maintained by none other than the multifaceted actor/artist James Franco, as part of his Yale doctoral dissertation on the topo-poetics of new media? In short, even though you have a group of more or less known followers, and you follow certain known people, you really never know what's going to happen on Twitter or who you are going to end up interacting with, and how. It's a public space.

Then Tim brought up the point of Twitter's information gathering—how Twitter can track what you click within people's messages, and how it modulates recommendations based on your deduced preferences. Here it is in their recently updated boilerplate:


Twitter may keep track of how you interact with links across our Services, including our email notifications, third-party services, and client applications, by redirecting clicks or through other means. We do this to help improve our Services, to provide more relevant advertising, and to be able to share aggregate click statistics such as how many times a particular link was clicked on.

This is perhaps troubling, but then again we don't actually believe that anything we do online is un-tracked or truly private, do we? Even when Twitter provides the directions for how to opt out of tracking, this doesn't mean that what I do becomes purely private. Likewise, I don't like how Twitpic defaults to "Set Location" whenever I go to upload an image to Twitter, but I don't believe that by un-selecting the radio button it actually forgets where I was when I uploaded said image. Everything I do online is stamped or tracked, by one agent or device or another. This aspect of the internet can tend to produce paranoia and anxiety about breaches of privacy. But the truth is that we live in an age of tracking, and we are thoroughly implicated in it.

Consider this week's charming New Orleans story by Thomas Beller (in the "Page Turner" column of the New Yorker online) to see how pervasive tracking is. In this story the writer has his iPhone stolen in broad daylight by some kids; Beller cleverly uses the "find-my-phone app" to track his phone—and thus also the moving target of the young thieves escaping by bicycle. Beller goes on heroically to pursue (on a Vespa, no less) his iPhone, tracking it on the screen of his wife's iPhone, and eventually ending up in an abandoned lot near the Mississippi River. I won't spoil the end of the story, here—it's well told and worth the read. But the reason I bring up this nonfiction narrative is to highlight how the author evokes new media tracking technologies as routine and normal—and yet at the same time as a covert and power-laden practice: for the boys who stole the phone appear utterly unaware that they have been tracked by AT&T and its so-called private consumer.

And this takes me to Jennifer Egan's wonderful new piece of short fiction, "Black Box"—a story written as a sequence of Twitter messages, such that every sentence/paragraph is under 140 characters. The story appears in this week's New Yorker (the Science Fiction issue), and it's worth reading in the paper edition of the magazine if only to see how the editors have attempted to do justice to the new media form in a paper format. But beyond its formal experimentation, it's also a speculative story about tracking, about how near future humans (patriots, especially) might be placed under constant internal surveillance and geo-location monitoring.  It would be a great story to teach alongside some Foucault—it's all about bio-power and governmentality.

Which leads me to teaching. Over this summer I want to think about ways to integrate Twitter into my classes next year. Twitter is rife with creative, literary, and theoretical possibilities—and so many writers and critics use it on a day-to-day basis. It would be interesting to have students follow a the feeds of a few writers or critics over the course of the semester, and then describe the various rhetorical shapes that different Twitter feeds can take. And I like the idea of assigning Twitter essays, or 'papers' comprised of a stream of Twitter messages: to be successful, the form requires very disciplined thinking, on the spot revisions, and direct prose. Don't get me wrong: I'm not saying that Twitter is the apex of communication or art, or that it rises above other forms of social media. But it is a compelling contemporary form of personal expression (if also tracking), one that should not be dismissed out of hand. I never would have guessed that Cinnabon would be watching me, or that I would unknowingly hail Cinnabon's watching me into existence.
Posted by Christopher Schaberg at 7:45 AM