This gem just arrived in the mail: 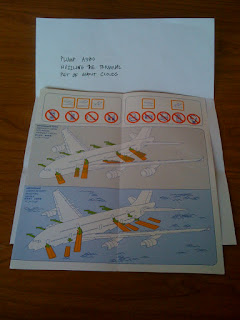 An Air France A380 emergency briefing card, and some airport haiku, from my awesome & inspiring architect cousin, Emily White!

Passenger parade
Mysterious upper deck
Who is sitting there?

In other news, a 787 Dreamliner made an emergency landing at Takamatsu airport in Japan after an apparent electrical fire, and the slides were deployed: 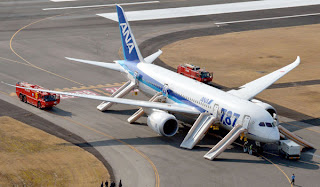 To modify slightly the words of Jacques Derrida: the airliner is the site of a great affair, truly. For me, the airliner is a church in which secret rendez-vous are given. When I seen an airliner with emergency slides popped I tremble as if in a sacred place, full of refused, promised, threatening pleasures.

Posted by Christopher Schaberg at 11:03 AM