Welcome Aboard, Mind the Battery

My essay on the Boeing Dreamliner has been published over at The New Inquiry.

I set out to write about the Dreamliner because I was intrigued by its innovative features and near utopian promises, details and visions hailed as the airliner merged into general commercial service around the globe. On one of their dreamy spreads for the new plane, Boeing marketed it as such:


Imagine inspiring views wherever you sit. Imagine arriving refreshed, with new technologies that actually invigorate. Imagine a plane with a smoother ride, where bumps are softened so you can rest easy. We did. And then we built one. The Boeing 787 Dreamliner. It's more than a dream. It's Boeing. Welcome Aboard.

If the airliner's reception was lukewarm (and in some cases probably not even noticed), this just made the case more interesting. As I was connecting through Houston earlier this month, I raced around the clamorous concourses in an attempt to see a United Dreamliner that was preparing to depart. When I got to the gate and stared out the window at the new plane, I was both captivated and a little let down: it's just another plane, another flight, ground-crew rearranging the baggage carts and cones, preparing for the next arrival. The Dreamliner's engines revved a vaguely alien hum as it prepared to roll toward the taxiway. 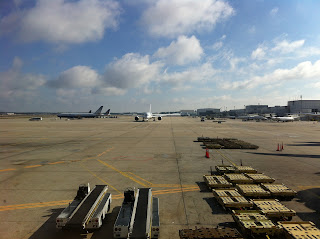 When I first began to write about the Dreamliner, I thought I'd take a round-trip flight on the new plane and write about it while flying and between the flights. (I might still do that at some point, for a different kind of essay.) But then I started to read about about the reactions of people who had now flown on the plane (e.g., "Oh my God, the toilet is amazing!"..."The windows are a tiny bit bigger!"), and I started to think that another way to approach the object of the airliner would be from a discursive distance, as it were—as a new piece of technology provoking surprisingly underwhelming reactions & responses, attitudes and affects that reflect the current comportments of air travel.

Then as I combed through the various reports and accounts of the new airliner, and as as I ruminated on the rather flaccid romance of commercial air travel as it has come to emerge in 2012, I found myself looking back at earlier airliners—two in particular developed in the 1960s, the DC-9 and the Boeing 737, two planes with very different lives and fates. Thinking about these planes, constellated historically and contemporaneously in relation to the Dreamliner, gave the essay a new shape and trajectory.

As the Dreamliner experienced electrical fires and was eventually grounded around the world, the essay took on yet another dimension, one having to do with the lithium-ion batteries that nestle in our pockets and threaten the new airliners. It's curious that we can cognitively separate a battery from an airplane, but to isolate a mere wing or window as problematic would seem nonsensical: it's the plane, stupid.

For now the Dreamliner remains grounded, its future uncertain. This is a good time to think about the airliner, while we can't yet fly on it. 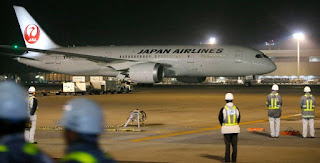 Posted by Christopher Schaberg at 10:06 AM