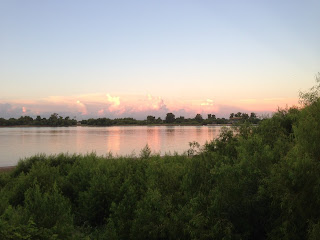 As I've been spending more time standing in and walking along the Mississippi River on recent mornings, I've also been thinking back to an earlier time in my life when I worked as a river guide in Wyoming for a couple summers, toward the end of college and directly after.

I remember the thrill of learning to navigate the twelve-foot inflatable rafts, which were nothing like the canoes I'd grown up paddling on Lake Michigan. Those old aircraft-aluminum canoes have keels that cause them to maintain a fairly straight course, and if you can manage a clean J-stroke you rarely even have to switch sides to paddle. They cut through the waves and are incredibly lightweight for their size.

Although I found the rafts to be entirely different creatures, squirrelly and sluggish compared to a canoe on the lake, I nevertheless found my paddling skills adaptable, and I learned to sit on the stern of a raft and steer while commanding paddling passengers and negotiating fast and varying currents. (It occurs to me now that the crash courses in paddling we gave our guests before each trip were also pedagogical training for me, prior to graduate school: I was learning to be an instructor.)

I recall a breakthrough moment when I learned how to use a "ferry angle" to move upriver—you can see ducks doing this, swimming at approximately 45 degrees against the current, in order to move upstream. You actually use the water's flow against itself, using the angle of the boat to slide counter-current, say if you want to slip into an eddy to rest or talk about lodgepole pines or bank swallow habitat.

That was on the Snake River, just south of Yellowstone National Park. There were two sections of the river that I primarily guided on: a short whitewater trip that went through a sheer canyon; and a longer, meandering scenic tour that ended up on Jackson Lake. We used bigger, eighteen-foot rafts for the latter scenic trips, and you rowed those boats instead of using a team of paddlers as on the whitewater. I don't have any photographs from those days, but here's one I pulled from the OARS (who I worked for) website—this was me (or someone like me), thirteen years ago, on a scenic stretch of the Snake River: 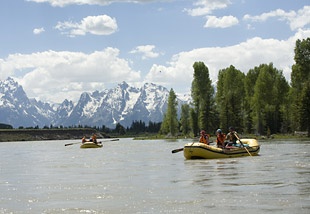 My river guiding days involved something of a script revolving around natural history and riparian ecology of the region. The daily grind got to me after a while, and I realized that guiding wasn't really for me as a long-term profession. But the more I think back on those summer days, the more memories flood back into my mind—freak storms, weird sightings, fun and spontaneous evenings with my fellow guides going on all sorts of adventures...I'm having a hard time keeping up with the memories even as I write this sentence. At any rate, it was quite a different kind of river experience from what I'm doing these days, wandering among the mud, rocks, metal pipes, and other stuff that gets exposed as the river level drops. I'm not exactly on the river, like I was in Wyoming. It's more like the river is getting on me. There's a Jim Harrison poem called "River VI" in which he alludes aptly to this feeling:


The water slips around your foot like liquid time
and you can't dry it off after its passage.

I'm getting used to—and used to looking forward to, but not being able to control—the surprises that await me each time I go to the river. Surprises such as the perfect butternut squashes the other morning that were scattered along the bank, having fallen off some boat en route from Honduras. 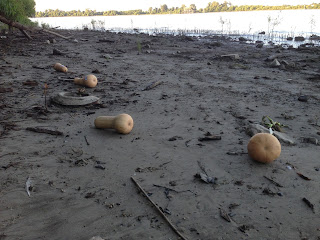 Then there was the alligator yesterday morning, just hanging out about twenty feet from the bank. 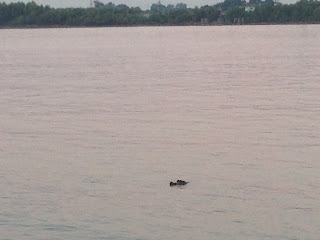 I've had the ridiculous thought of wearing one of those sporty video cameras on my head to record all the crazy (or just mundane yet somehow profound) things I've been seeing on the river. But the iPhone camera is enough (until I drop it into the river, which fate I fear I'm tempting), so I'll stick with occasional grainy photos and this brief prose for my river notes.
Posted by Christopher Schaberg at 2:19 PM