It's startling how fast photos can pile up in an iPhone.

My colleague Tim Welsh wrote a really smart essay about Instagram that was published over at Media Commons in a cluster on "The New Everyday." I have a short piece in this series too, about the Mississippi River.

I was thinking about the photos on my phone, though, because I recently returned from two trips—to South Bend, Indiana, and to Uppsala, Sweden—where I presented papers at two very different (both fantastic) conferences, and I took pictures along the way. A lot of airport shots (Stockholm Arlanda airport: amazing!), and a few of the Mississippi River from above as my return flights cruised in over the city on approach to Louis Armstrong International.

In South Bend, at the annual conference for the Society of Literature, Science, & the Arts, Tim Welsh and I presented a paper we wrote together that merges my interest in air travel with his theory of "mixed realism." The latter is an exciting critical concept that Tim is finishing a book on: he considers an array of literary texts alongside videogames to show how virtuality and reality get entangled in different media forms, and the implications of these entanglements. At SLSA it was great to reconnect with many old friends from Davis, including Tim Morton who I'm going to be bringing to Loyola this coming February to give a talk and meet with faculty and students. (I just got my copy of Tim's latest book, and am excited to dig into it.)

In Uppsala, I was a plenary speaker for the Nordic Association of English Studies, whose conference this year was themed around "places and non-places." I presented some of my latest thinking about airports, in particular musing about my own local airport and its current plans for renovations and reconstruction. Uppsala is a charming college town north of Stockholm; the people were so friendly, and the scholars I met from the university were wonderful. I hope to return someday. Bruce Robbins was also a plenary speaker at the conference, and I so enjoyed getting to know him over many meals, and I have fond memories of ambling through Uppsala at night back to our hotel after late (delicious) conference dinners and drinks, walking along the cobblestone streets in the crisp night air discussing David Foster Wallace and a plethora of other topics. I'm scheming to bring Bruce down to New Orleans next year, as his excellent and lucid work intersects the interests of numerous colleagues at Loyola. It will also be fun, which is actually an important part of why we do these things.

On my iPhone I have hundreds of pictures of all sorts of things from the past month of travels: a gray Lego block I found on the grass of the campus of Notre Dame; airplane meals on Air France; the fall colors flying into Stockholm; people pushing prams around Uppsala; the curves of Charles de Gaulle; other delirious visions inspired by jet lag....

But the iPhone is currently sitting next to my bed, in the back of my shotgun home, and since it's late and everyone is asleep, I don't want to tread across the creaky heart pine planks to get the phone. I'll hold the photos in abeyance for now.* Anyway, most of the good ones are already on twitter—it's so much easier, and I love to see the nearly immediate feedback from other people, often surprising. I am relatively disinterested in online education, and yet in a weird way I've also been embracing it on twitter, it occurs to me now.**

I feel obligated to keep this blog somewhat fresh, but increasingly it seems like a burden and a hassle. Yet it's still an archive of projects, connections, ideas, and other things.*** So I'll continue to ambivalently update this blog from time to time, even as it seems to creak sort of like the century-old wood beneath my feet.

* Later I retrieved some of these photos from my phone, and while I do not want to compromise the point of this blog post, I cannot resist retroactively including one picture I took inside the magnificent Stockholm Arlanda airport. I'll make it small, so as to de-emphasize it: 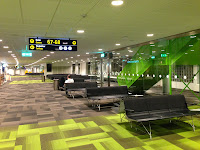 ** Here's the strange thing about twitter, though: it becomes so total and can stretch and flex so well to account for different thoughts an impressions—scholarly, slapstick, sarcastic, serious, playful, passing, pleasantry, poetic, preening—that it makes just writing like this feel somewhat stultified, rigid. I find myself wanting to include in this post everything I did over the past month—all the great conversations I had, people I chatted with, papers I heard delivered, etc...then realizing I could look back at my twitter feed to see just exactly what all those things were, but then realizing "what the hell, I've already written about it on twitter, why do it again?"—but then thinking "oh but that tweet was just a reminder to write about it later"...all of which spins into a vicious circle of reflexivity and reflection. (Or have I just read too much David Foster Wallace?)

*** Like this: A really nice review of my book was recently published in the journal Organization Studies.


Posted by Christopher Schaberg at 3:32 AM