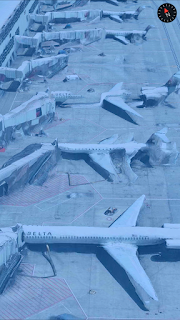 Earlier this month, sitting on the tarmac on a airplane in Detroit, in the middle of what would become a three-hour runway delay, which would then turn into a twelve-hour flight cancellation and rebooking protrusion, I pulled up the map on my iPhone to show my son Julien where we were, exactly, in line for de-icing. As the satellite view focused, I watched the airliners and jet bridges blur, liquid like, as they settled into proper resolution. For a moment it resembled a Wayne Thiebaud cityscape, the way the recognizable forms of the airport veered and smeared, hyperreal. I quickly captured the image mid-focus, which you can see above. My new book The End of Airports puzzles over these sorts of strange, spontaneous comportments: when we are in the airport on the brink of flight; tethered to the ground while visualizing ourselves soaring above the earth; or sitting in jetliners at cruising altitude feeling nowhere at all, not exactly.... I still have more to say about this experience. Maybe in the next book.

Some big news, related to my new book: Nathan Heller's ruminative article on flight in this week's New Yorker, "Air Head," cites The End of Airports fairly substantially. I was delightfully surprised, and honored, to see my work on airports discussed so thoughtfully throughout Heller's piece. 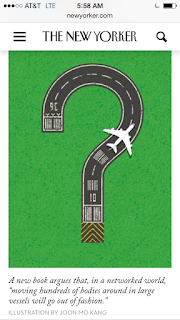 My special issue of Criticism on "critical air studies" is now out; this issue features an array of scholarly inquiries into the culture of flight, and I'm very happy with how it came together. You can read the beginning of my introduction to the issue here, and here's the cover of the issue, which riffs on airport carpets (but not PDX). 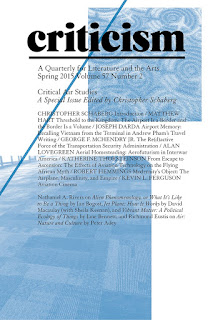 And if you are craving some lighter reading on the culture of flight, our book Airplane Reading is almost out! The book should be published in May: 54 wonderful contributions by a wide range of writers and air travelers. This book was a blast to put together with my great friend and colleague Mark Yakich. Look at the cover, a fantastic collaboration between Nancy Bernardo and the design team at Zero Books: 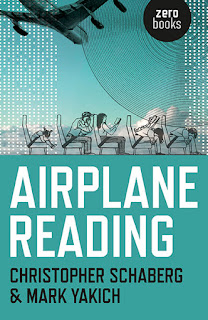 A couple other things while I'm in overview mode: I wrote a piece about the Millennium Falcon in the new Star Wars movie "The Force Awakens" for the Los Angeles Review of Books' Philosophical Salon, and I wrote a review of Maggie Nelson's book The Argonauts, for 3:AM Magazine.

Finally, last but not least, Object Lessons continues to bloom, with fifteen books now published and many many more in the pipeline. You can hear Alison Kinney talk about her new book Hood, and me talk about the series in general, on a Jefferson Public Radio show we did together the other day. LARB also did a long interview with me & Ian about the series, and then later they ran a generous omnibus review of the first ten books in the series. I wrote a bit on the Bloomsbury Literary Studies blog about teaching with the series at Loyola, an experience I'm eager to recreate in Fall 2017, when I return from my sabbatical. Object Lessons continues to be a thrilling adventure in editing and publishing—with no end in sight. 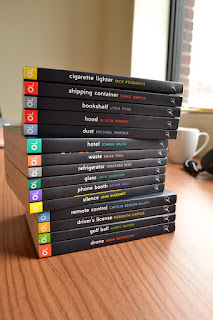 Posted by Christopher Schaberg at 10:51 AM