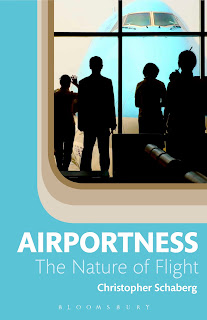 Airportness: The Nature of Flight

I am very happy to announce that I just signed a contract for my next book, which will be published by Bloomsbury in fall 2017. The book is called Airportness. Here's a short description of what this book is about:


Airportness takes the reader on a single day’s journey through all the routines and stages of an ordinary flight. From curbside to baggage, and pondering the minutes and hours of sitting in between, Christopher Schaberg contemplates the mundane world of commercial aviation to discover “the nature of flight.” For Schaberg this means hearing planes in the sky, recognizing airline symbols in unlikely places, and navigating the various zones of transit from sliding doors, to jet bridge, to lavatory. It is an ongoing, swarming ecosystem that unfolds each day as we fly, get stranded, and arrive at our destinations. Airportness turns out to be more than just architecture and design elements—rather, it is all the rumble and buzz of flight, the tedium of travel as well as the feelings of uplift.

Posted by Christopher Schaberg at 8:21 AM