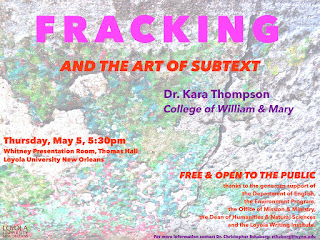 This week I had the pleasure of hosting my great friend Kara Thompson at Loyola. Kara and I were at UC Davis together as graduate students, and we've been trying to coordinate a visit to one of our campuses or the other for several years—and it finally worked out. The timing ended up being perfect in many ways. Kara visited my classes, and I was so pleased with how my students engaged Kara's work (and I was delighted that Kara managed to assign the perfect reading with which to wrap up the semester, Mel Y. Chen's "Toxic Animacies, Inanimate Affections"). Later in the day Kara gave a wonderful public talk that wove together threads from Prince, Jurassic Park, diagrams of hydraulic fracturing, Fredric Jameson, and Walt Whitman's poem "I Sing the Body Electric"—among other rich visual and cultural texts. We had a good turnout (especially considering it was so late in the semester), comprised in part of many of our terrific Environment Program students, who were a vibrant audience for Kara's presentation.

A couple years ago I started posting the introductions I write for various visitors' talks, because I realized that our written introductions for such events often end up in the trash—but I actually enjoy writing these things, and I want to preserve them somewhere (like here). So once again, here is my introduction to Kara's scintillating talk at Loyola, "Fracking and the Art of Subtext."

Just yesterday I watched a video introduction by eco-critic Richard Kerridge for a new series of books with the theme of "Environmental Cultures." The scope of the series was astonishing and thrilling—books in the series could be about practically anything so long as the authors could make smart connections to matters of environment, ecology, or nature. So this series might include animal studies, posthumanism, feminist ecocriticism, cultural geography, disaster theory, new materialisms, queer ecology, nature writing unbound...there would seem to be no limit.

As I say, this is exciting: once we loosen our definition of "nature," or realize, rather, that there's no outside of it, anything becomes a subject, or an object of serious inquiry. Environmental studies goes anywhere, with anything. But this can be daunting, too—or just plain bonkers. Imagine sitting inside the airport to practice "environmental studies"! When you say that something is anything, where to begin (or end)? How does one demarcate a project, establish an archive, conduct experiments, interpret results, formulate a theory—any of these things, when ecology is understood to be such an endlessly seeping, leaking, expanding field? One tentative answer: you have to do it very carefully, and with keen attention to detail, contradiction, and slippage.

And this is where Kara Thompson's work comes in.

Kara Thompson, assistant professor of English and American Studies at the College of William & Mary, works on the edge—or at the intersection, or overlap—of disciplinary thought. Bringing cutting edge critical theory to bear on tense questions of borders, territory, sexuality, national identity, and indigeneity, Kara's research routinely unsettles what we might think of as set in stone. Indeed, in Kara's thinking even "rocks" become points of fascination and are thereby unsettled from their resting positions as inanimate objects.

But once the land itself becomes so open to interpretation—as in fact we know it is, from the most mundane property dispute to the most heated national border debates—then what to we do about the things that would seem to grow organically from the land, whether they be so-called invasive plants, or human settlements? How do citizens become naturalized? What is a foreigner, or a foreign object? Are attractions natural, are repellents cultural? Have these sorts of frameworks outlasted their use (and maybe for good reason)?

Everything is in play, nothing can be taken for granted. We are in the weeds, right here, across the street from Audubon Park, sitting in this nice neat quiet and climate controlled room. Welcome to "environmental cultures" writ large. This is no mere academic exercise—this is real life, fecund and brimming. Here we have to read closely and carefully, and go slowly—and we need a good guide. Kara Thompson's writing takes us into the utterly familiar, which may then turn out to be bizarrely unfamiliar. But the wager is that such interpretive adventures will make us see—and act more justly in relation to, while entangled with—the rich complexities of this world, our present place in space.


Posted by Christopher Schaberg at 6:39 AM