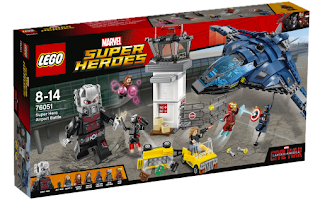 Last week I followed one of those frequently insane suggestions on Amazon for things I might be interested in, based on my browsing history. And, I’ll admit, this one was immediately intriguing: it said Lego Airport Battle. The full description was Super Hero Airport Battle, and as I inspected this set I was at turns baffled, turned off, and utterly delighted.

The set is apparently based on a scene from the recent blockbuster Captain America: Civil War, which features a tumultuous battle on the tarmac. 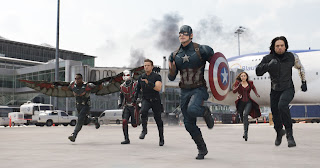 Think about what the Lego set does with this scene. All the objects and operations of the airport are distilled to the bare minimum: a Tug and baggage cart (replete with spilling suitcases), some illuminated wands for the (absent) ramp worker, barricades with no-entry signs, and an air traffic control tower. Some cryptic containers, too. All else is implied, and the scene is given over to the Marvel super heroes who are wreaking havoc on the non-place. On the Lego packaging, the tarmac is busted and the baggage cart is tipped over. In the movie, the floor-to-ceiling windows get smashed, a car park is demolished, and explosions rock the terminal (among other acts of destruction).

This Lego set and the cinematic scene it is based on got me wondering: why stage attacks at airports, whether for terror purposes or entertainment? I decided to write about this for The Atlantic.

Posted by Christopher Schaberg at 9:38 AM